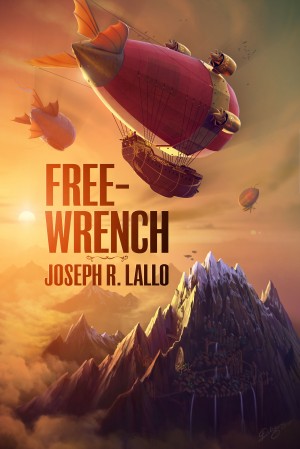 By Joseph R. Lallo
Rated 4.43/5 based on 7 reviews
Beyond the islands of Caldera the world is a vicious place. A terrible calamity has poisoned the land. Those too ruthless or stubborn to die have crafted steam-powered mechanical wonders and taken to the sky. Yet somewhere in that wretched land there is a cure for a dire disease. With the eccentric crew of an airship called The Wind Breaker, Nita Graus means to find that cure, whatever the price. More
The islands of Caldera are a shining jewel in a rather bleak world. A terrible calamity in the past had blanketed much of the world with a toxic "fug." Those who survived were forced to take to the mountains and the skies in wondrous airships. Life has since been a struggle, with only the most ruthless and crafty able to survive. To spare themselves the same fate, the Calderans erected a battery of guns to fend off the airships of the mainland. They isolated themselves from the madness of the world, choosing instead to focus on the pursuits of art and creativity. Few believe the technologically advanced but socially barbarous outsiders have anything to offer. Amanita Graus, though, is hoping that they do.
Nita's mother has lost her livelihood and perhaps soon her life to a terrible disease. Already the black sheep of the family for embracing engineering rather than art, Nita resolves to leave the safety of her home and do whatever it takes to find a cure. For a price, the bizarre crew of an airship called The Wind Breaker are willing to grant her a meeting with their mysterious benefactors, and thus a chance to procure the one thing with a chance to save her mother.
Free-Wrench follows Nita’s adventures in a steampunk world of airships and lunatics. Helping her in her journey are an eccentric crew of smugglers; the gruff Cap’n Mack, the simple but enthusiastic Lil and Coop, the arrogant marksman Gunner, the surly surgeon Butch, and the irritable mascot Wink. To survive and find what she seeks she’ll need to earn their trust, follow their rules, and meet face to face with the people who pull the strings of their society.
Download: epub mobi (Kindle) pdf more Online Reader
rtf lrf pdb txt
Price: Free! USD
Add to Library
Create Widget
Tags: adventure action steampunk airships
About Joseph R. Lallo

Follow the exploits of Amanita "Nita" Graus, Captain Mack, Lil, Coop, and Wink as they soar through the skies of a steampunk world.

Pure swashbuckling steampunk escapism; leave your skepticism at the door. An extra star for including a finger tapping lemur. This story is very well written and I found no inconsistencies. It has more steam than punk, so I can easily imagine this being adapted for a Studio Ghibli film.

Disneyesque, however not saying that's a bad thing. Nice clarity of story, wholesome heroine, well polished. Not dark steampunk. Properly on the mark for YA, I'm OA, but still enjoyed it.

Joseph Lallo creates a well-imagined and detailed world in Free-Wrench, but the strength of the book is its characters.
Amid a steampunk setting, Amanita, a clever and driven young woman, has a goal: a cure for her mother's deadly illness. That single-minded ambition takes her on a journey from the safety and comfort of her island home, to distant lands that are almost alien in their cultural differences. But she's both helped and challenged by the crew of the airship she barters passage upon, and these disparate characters evolve from cohorts, to friends, and finally to something akin to family.
Free-Wrench is a light, fun read that's well-written and well-paced, with plenty of action and peril to bring out the best in its protagonists.

A 'Free-Wrench' is a jack-of-all-trades in the geothermal steam plants on a chain of isolated islands on the planet where this takes place. I can't really call this space opera because no one thinks about space. I can't really call it science fiction because science is completely ignored. I can call it entertaining however because it is a breathless adventure almost from the get-go. I can even call it slightly meaningful because in here we see protests about how corporations make products that are impossible to service and protests at the way big pharma refuses to do research on antibiotics because they actually cure a disease instead of just treating it in a way that makes you dependent on the drug for life. I once knew a guy who worked at a Pfizer research lab. He said if anyone there was to ever discover a cure for cancer, their lab would be leveled and their body would have been found floating in the Thames the next day.

The plot is about a girl who was a free-wrench, a girl who's mother was dying of a disease for which there was no cure on the island. She meets some smugglers who tell her there may be a cure for that disease on the mainland so she makes a hasty decision to go off with them on their blimp in search of it. Their society is quite lawless and that decision leads to quite a series of adventures. The mainland's industry and science is under control of a mutated race of people who live under a toxic fog that has covered most of the continent. the people of the 'fug' as that toxic fog is called, don't allow anyone else to do any technical work and that makes her run afoul of them. In the steam age, turning a wrench is considered technical work.

The only sex in the story is one crewman's liking for 'girlie' pictures. The main character comes off as quite the prude about it. The violence is high but not gory and the action is almost cartoon-like in it's unreality. Everything happens at the very last split second, people fall off one blimp to land on another, that kind of thing. It's fun, but not very realistic.

I have never read any steam punk fiction, but I tried this one. It was a great tale and I enjoyed it very much. I intend to buy the next book.

An excellent story, I do not agree with Shelby Suderman's complaint, I see nothing wrong with dialog to describe feeling, it brings the characters to life.

'Free Wrench' is precisely the adventure yarn I was hoping it
would be, very good enjoyment all the way. Thank you mr Lallo.
Now I must check out the rest of your works.

For those who don't know, the official definition for the steampunk genre goes like this:

"A subgenre of science fiction (or science fantasy) that incorporates themes and motifs from the 19th century's steam-powered industry and designs, set either in an alternate version of the Victorian era or a post-apocalyptic future in which steam is the main source of power. Common themes include exploration and industry."

Now, compare that to the majority of popular books categorized as steampunk right now. I've been searching around for something to read in this genre for quite a while and an awful lot of it seems to be lacking in the science fiction department. It's one of the reasons it's been so long since I've read the genre; the most steampunk thing about a lot of these is the cover.

Well, I'm happy to report that Free-Wrench by Joseph R. Lallo delivers on the genre it promises with that gorgeous cover and intriguing blurb!

In the world of Free-Wrench, an apocalyptic event known only as 'The Calamity' took place a long time ago, where a creepy violet fog, known only as 'The Fug' engulfed much of the continents, rendering a large part of the planet uninhabitable, and there it stayed. What's left of humanity formed some small countries that have managed to find areas untouched by this Fug, and built around it, using what plants and animals weren't killed off to sustain themselves and trading in goods. Airships and the like are the main mode of transportation.

Enter Amanita (or Nita) Graus. She has lived her whole life on a small country made up of a collection of tiny volcanic islands called Caldera. These islands are clean of the Fug, being one of the few areas never to be touched by it. Long ago, the Calderans decided to isolate themselves from the rest of the planet, so as to keep themselves separate from the rest of the worlds problems. Instead, the Calderans focus their energy on art and creativity in all things. It's a peaceful life, but also means they don't have access to the same medicine the rest of the world has. Medicine like Nita's mother needs desperately.

And so Nita, who was always more mechanically inclined than artistic anyway, joins up with a rag-tag crew of sky traders to make the dangerous journey from the only home she's ever known to visit the people known as the Fug-Folk; the mysterious people who have adapted to living in the Fug, despite how dangerous it is to everyone else. Cold, creepy, and possibly clairvoyant, they run the global trade market, and now they're Nita's only hope.

If I had one complaint, it would be that sometimes the writing relied too much on the dialogue to communicate what the character was feeling or how they were acting instead of describing those actions. It took me out of the story a few times. Still, I really enjoyed this and I will definitely be continuing the series in the future.

(review of free book)
W. D. Smyth reviewed on March 3, 2015
(no rating)
Good work... Steampunk is tricky. Often, the setting overshadows the characters, and plot. With this art, you've made the genre competitive. It's nice to see someone take it out of the shadows. Full steam ahead.............

You have subscribed to alerts for Joseph R. Lallo.