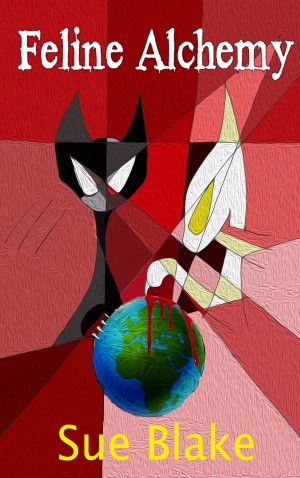 I am Sue Blake and, against my better judgement, I’ve decided to take ownership of this messed-up world of ours. Here are my confessions…

After I was saved from drowning on Christmas Day I accidentally made a deal that sent my whole life veering off the rails. Now I’m in thrall to two strong, bewitching women who call themselves Queens of the Nile. I’m also plagued by wolves, the police and ex-wives. They all want to ruin me.

But I can see a turning point. After all, I’ve got feline alchemy at my disposal. Maybe I can win?

This is the most well written, well plotted urban fantasy that I’ve read—totally refreshing and full of dark humor, originality and imagination. The novel is in a brilliant original style that incorporates Kafka-esque moments with Henry Miller's stream of consciousness. Review by Howard Lipman—pen name PanOrpheus, author of the Delphic Oracle.

I didn't know whether to laugh or cry as I whipped through the pages. To me, that defines a great and original book. Sue Blake's writing style cuts deep with realism and raw wit. If I had to pull an author out of my hat to compare him with I would have to say Palahniuk or maybe Prunty. Two of my favorites by the way. Review by Craig Furchtenicht, author of Dimebag Bandits.

Sue Blake is a writer of SFF stories and has published a début dark fantasy novel called Feline Alchemy. Born in Wensleydale, England, Blake studied Privilege at Cambridge University and now lives in Milton Keynes with two cats. To relax Blake enjoys kung fu, cycling and not being able to drive. Blake is the reigning British MouseBall champion and has made it a personal priority to see that the sport achieves official Olympic status in 2020. Following a recent bout of illness, Blake was forced to quit a job as a Marketing Executive after extensive medical tests diagnosed that the patient is allergic to adverts.

Well, this was fun.

Reading it I felt a bit like the Japanese Emperor who wondered if he was dreaming he was a butterfly, or the other way around? The book's author is Sue Blake and the hero has the same name. So is this book by a woman called Sue Blake writing about a man who is also called "Sue Blake"? Or was Sue Blake just a pen name all along? Not sure. And I doubt if it really matters.

What does matter is that this is the most original shape-shifting story I've read in years (and I've read A LOT of shape-shifting stories over the last five years or so). With most of those stories I could've told you exactly what was going to happen almost as soon as I picked up the book. But with this story the opposite was the case: the more I read the less idea I had of where the writer was taking me. And when I got to the end of the book I thought "Wow! Never saw that coming. Classic!"

I see that people on Amazon have said they hope there'll be a sequel and I agree. Having said that, I also like how the ending of Feline Alchemy is left wide open to interpretation. It poses some important questions and leaves you thinking. Plus there's plenty of humour. So, I give it 5 stars.

You have subscribed to alerts for Sue Blake.

You have been added to Sue Blake's favorite list.

You can also sign-up to receive email notifications whenever Sue Blake releases a new book.