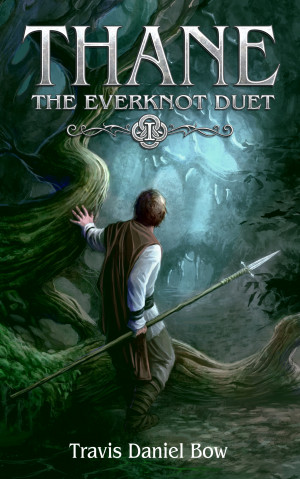 By Travis Daniel Bow
Rated 4.00/5 based on 1 review
A young fanatic, a cadre of elite rebel spies, and a betrayal that will change everything. More
Timothy is awkward, angry, and itching to fight. When he is kidnapped and conscripted into a secret army--and when a girl with a strange set of skills sets him free--he throws himself into the rebel cause. Igniting years of pent-up frustration into an obsessive drive to fight, spy, and deceive better than anyone else, he loses himself in the Band. But a bigger game is afoot, an old enemy is on the hunt, and everything Timothy has come to live for is at stake.
Available ebook formats: epub mobi pdf lrf pdb txt html
First 50% Sample: epub mobi (Kindle) lrf more Online Reader
pdb
Price: $3.99 USD
Buy Add to Library Give as a Gift
How gifting works
Create Widget
Tags: friendship espionage training brothers swords spy boys sword boys adventure brotherhood rebels
About Travis Daniel Bow

Travis grew up in Reno (where he raised pigs for FFA), went to Oklahoma Christian University (where he broke his collarbone in a misguided Parkour attempt) and Stanford (where he and his bike were hit by a car), and earned 6 patents in the Bay Area before returning home. He now designs medical robots and does CrossFit by day, works on an MBA and plays board games with his wife and three kids by night, and writes fiction by very-early-morning.

About the Series: Everknot Duet

How two boys changed the fate of a nation.

This is a well-written, vividly realized book, with well-developed characters and plenty of tension to pull the reader along, but the ending leaves more questions than answers. Thane is subtitled Everknot Book 1. I was given a copy of it to review, and my copy didn’t mention that, so I was surprised when Timothy, the main character, spent so much time preparing for battle, too much time for him to be able to do much battling in this book. Then at the end, the author steps out of Timothy’s head and calls him “the flatlander” — at least it was my opinion that “the flatlander” was Timothy — so what if anything he accomplishes in this book becomes even more vague.

I had another problem with point of view. Each chapter is titled with the point of view character for that chapter, which works fine. As I said, each of the characters is well-drawn, and using multiple points of view so the reader knows more than any of the characters is a good way to build suspense. But some of Timothy’s chapters contain sections in italics describing events that Timothy was either too young to remember or didn’t see at all. So they’re not flashbacks of Timothy’s. They’re bits of backstory that the author wanted to insert, and apparently he didn’t think the reader would be smart enough to realize these bits of backstory relate to Timothy unless they were put in chapters with Timothy’s name on them. I think they would have been less jarring if they had stood on their own.

This is a small complaint, however. I thoroughly enjoyed the world of this book. Even the details of months of training kept my attention. And the foreshadowing of the backstory gave it additional depth. Just be warned that this book doesn’t really stand alone. It has a beginning, a middle, and a climactic end, but no knots are tied at the end. All the threads are still left dangling for Everknot Book 2.

You have subscribed to alerts for Travis Daniel Bow.

You have been added to Travis Daniel Bow's favorite list.

You can also sign-up to receive email notifications whenever Travis Daniel Bow releases a new book.