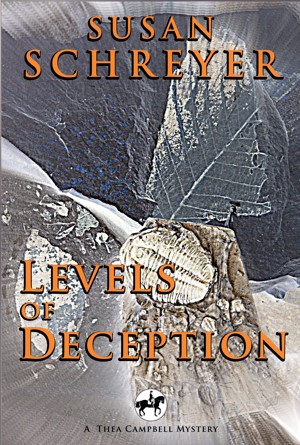 By Susan Schreyer
Rated 4.00/5 based on 1 review
Thea intends to clear Paul of suspicion in the theft of valuable fossils as well as the murder of a fellow professor. But Paul won't tell her what's going on, and someone is trying to kill her. She has no inkling how deep or personal the levels of deception will run, or that the price of her pursuit of truth will be blood. More
Thea isn't supposed to obsess about a murder in the basement of Seattle's Burke Museum, even though the victim was her absent boyfriend Paul's colleague -- even though her gut screams at her to pay attention. So when the police connect Paul to thefts at the museum and the murder, despite his being two states away on a dig, Thea secretly launches her own investigation to clear him. Paul's stubborn refusal to give her any information doesn't slow her down, but an attempt on her life does. Coerced into running to Paul's paleontology dig in Montana for safety, what she finds there is far from a refuge. The levels of deception are more personal and extend farther than she could have imagined. The price of her pursuit of truth will be blood.
Download: epub mobi (Kindle) pdf more Online Reader
rtf lrf pdb txt
Price: Free! USD
Add to Library
Create Widget
Tags: romance mystery woman sleuth pacific northwest mystery suspense
About Susan Schreyer

Susan Schreyer lives and writes in Washington State. She shares space with her husband, son and, from time to time, her daughter. Her three cats have given up on supervising her writing and her horse never had any interest in anything but dressage and eating, anyway. From time to time Susan imagines herself resurrecting her blogs, but don't hold your breath. She's currently livin' the dream and can't be relied upon for follow-through.

Her Thea Campbell Mystery series includes (in order of publication) DEATH BY A DARK HORSE, LEVELS OF DECEPTION, AN ERROR IN JUDGMENT, BUSHWHACKED, SHOOTING TO KILL and SAVING THE QUEEN OF DIAMONDS. Another is in the works, but is currently nameless.

Reviews of Levels Of Deception by Susan Schreyer

A university professor is dead. Important fossils are missing. The last thing Thea Campbell wants is to be involved in another murder investigation, but when her absentee boyfriend Paul becomes the prime suspect, she has little choice in the matter. Thea is determined to clear Paul’s name, whatever it takes—whether he likes it or not. But will their relationship survive the pressure? And will Thea find the killer before he finds her? The levels of deception are far more personal than anyone could have imagined in this fast-paced murder mystery.

Levels of Deception is the second book in the Thea Campbell Mystery series, and picks up roughly where the first book, Death By A Dark Horse, left off.

After dancing around each other throughout Dark Horse, Thea and sexy palaeontologist Paul are finally together, but it’s not all romance and sunshine. Concerned for her safety, Paul is determined to put a stop to Thea’s amateur sleuthing, even if it’s his own life on the line. That he doesn’t trust her only riles up Thea’s infamous temper, meaning that their relationship is rocky even before the murder investigation begins!

Then the department chair of Paul’s university is murdered, and the very fossils he was working on are stolen. All signs point to Paul, but Thea does some digging of her own and becomes embroiled in university intrigue. Coupled with an unexpected visit from her emotionally-distant mother, a family wedding on the horizon, and being far too stubborn and reckless for her own good, and Thea has far more trouble on her hands than she can handle.

In Levels of Deception, Schreyer has kept the interwoven plot lines, surprise twists, well-rounded characters and realistic dialogue that so entertained us in the first book of the series, but she’s made some changes as well. There’s less horse-riding and more romantic drama, meaning that Levels of Deception is likely to have wider appeal than its prequel.

In sum, if you're looking for a cozy murder-mystery with nail-biting romantic drama, this is the book for you.

You have subscribed to Smashwords Alerts new release notifications for Susan Schreyer.

You have been added to Susan Schreyer's favorite list.

You can also sign-up to receive email notifications whenever Susan Schreyer releases a new book.