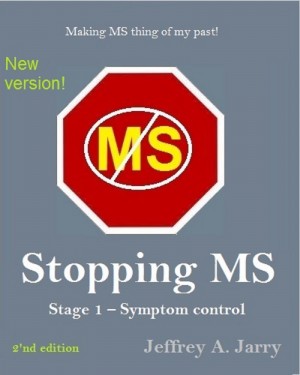 By Jeffrey A. Jarry
Read about the beginning of a recovery from a disease called Multiple Sclerosis – MS. See exactly what I did and how I started feeling better very quickly. Bottom line – it actually worked!

PS: The new version goes straight to the recovery! No longer do you have to read several chapters to get to the true reason for writing the book. More
Here are a couple of the reviews that people have given for the book:

I read this book in less than 24 hours, it was so inspiring for me to read the huge obstacles the author had to overcome! Be prepared to shed some tears and to laugh! It really put things into perspective for me and made me realize that the every day things most of us complain about really are quite trivial when compared to an illness such as MS! If he can fight thru this-and you will have no doubt that Mr. Jarry is a fighter, then surely we can overcome the mundane obstacles most of us face! I highly recommend this book! I am looking forward to his others! Thanks for sharing your story with us and showing us there is hope even if we think all is lost!!

I have a friend who is battling MS so when this book was recommended to me I didn't hesitate. I had hoped to learn more about this terrible disease, gain an understanding of what the day to day challenges were for my friend, and maybe learn a few things about how I could help. Wow. It was all of that and so much more. My copy of "Stopping MS: Stage 1 - Symptom Control" has more highlighted sections and dog eared pages than any other I have read.

I cried, I laughed, I gained an entirely new level of respect and admiration for my friend and those facing this disease, I reflected on how I handle challenges in my own life, I counted my blessings, and most of all, I was inspired.

First, the expectations that were met and exceeded:
Not only did I learn a great deal about the disease, I learned what it's like to live with it. The author brings you into his world and gives you a very personal account of how his life has changed so drastically. It will bring you to tears but it will also inspire you to never give up, to take charge of your health in every way you possibly can, and to see the light even in the darkest times. God sends us angels when we need them most.

Second, things that I did not expect.
The author has done extensive research (on his own and with the help of an amazing support team) on how diet, exercise and supplements can effect the symptoms of his disease. I found his recommendations for those suffering from MS also applicable to me and probably most people. I have been doing my own reading and experimenting with diet, supplements, and exercise due to health challenges (nothing nearly as drastic as MS). I found that many of the same things that I have found that reduce inflammation in the body were also helping the author reduce his symptoms. So many things that he was saying "clicked" and were completely aligned with what I had been reading and trying in my own life to feel better.

I could go on and on with reasons to buy this book but my review is already too long. Let's keep it simple: Do you know someone with MS? Do you want to feel inspired? Do you want to laugh, cry, reflect and be engaged in a fantastic and true story? If you said yes, then buy the book.
Available ebook formats: epub mobi pdf lrf pdb txt html
First 15% Sample: epub mobi (Kindle) lrf more Online Reader
pdb
Price: $0.99 USD
Buy Add to Library Give as a Gift
How gifting works
Create Widget
Tags: multiple sclerosis ms naturalpathy removing ms
About Jeffrey A. Jarry

I am a male who grew up in a small suburb with a great pizza place and a lot of kids. My father was a truck driver and my mother worked in collections at the local hospital. I was not brought up with a silver spoon; it was more like an ordinary metal spoon from Sears.
All I ever thought that was important as a kid was sports. It was always on the TV, constantly advertised on the radio, and everyone I knew played at least one.
I remember dreaming of my name being on a billboard and being shouted by hundreds of thousands of fans at some arena or stadium. I played all sports growing up and was always participating in some type of pickup game with the kids in the neighborhood. I changed the sport I was playing with the season, using the professional schedule as a guide. It was football in the fall, hockey or basketball in the winter and baseball in the spring. Summer was for a little more baseball, basketball, and for just being a kid.

About the Series: Planned Recovery 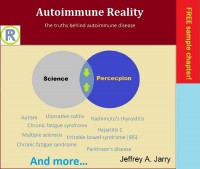 You have subscribed to alerts for Jeffrey A. Jarry.

You have been added to Jeffrey A. Jarry's favorite list.

You can also sign-up to receive email notifications whenever Jeffrey A. Jarry releases a new book.