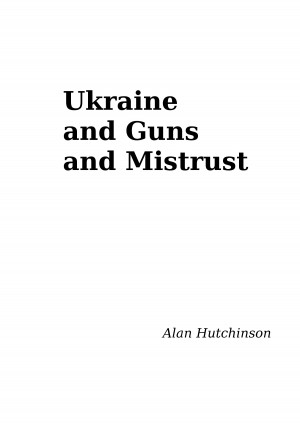 Ukraine and Guns and Mistrust

By Alan Hutchinson
Ukraine is following Yugoslavia and Syria. There are two essential priorities:
Trust your neighbours
Do not touch a gun.
No doubt there are bad things which have happened in Ukraine, and some bad things are no doubt still happening. They will not be stopped by more bad things. The two most dangerous things are guns and mistrust.
Download: epub mobi (Kindle) pdf more Online Reader
rtf lrf pdb txt
Price: Free! USD
Add to Library
Create Widget
Tags: guns ukraine syria trust yugoslavia foreign aid
About Alan Hutchinson

About mountains: when I was aged less than 10, as a family we all climbed The Old Man Of Coniston. The view from the top was still familiar the next time I saw it, decades later. Some five years later, the next notable climbing experience was in the Pyrenees when we camped in Andorra. Nothing much happened after that for fifteen years or so, when the experiences described in the MEWILA book began.

About science: again, before the age of 10, my father taught me how to build a radio. Later, he showed me books on cosmology. My student summer jobs included two with zoologists, one with computing people, and one with weather forecasters. That is not obviously why I studied mathematics.

About human character: some background in this subject can be very useful, if one wants to survive long enough in employment to collect a pension.

About riding bicycles: it is a good experience, and a good way to travel.

You have subscribed to alerts for Alan Hutchinson.

You have been added to Alan Hutchinson's favorite list.

You can also sign-up to receive email notifications whenever Alan Hutchinson releases a new book.