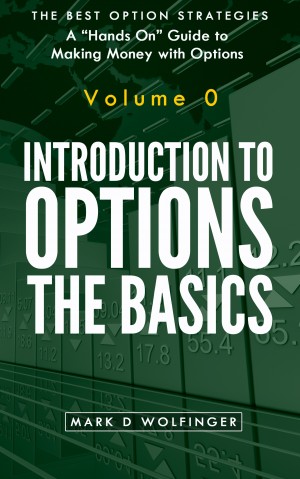 Introduction to Options: The Basics

By Mark D Wolfinger
A very basic introduction to options. The primary purpose of this small book is to allow readers to determine whether using options is suitable for them. Options are risk-reducing investment tools and are appropriate for a vast number -- but not all - investors and traders.
Download: epub mobi (Kindle) pdf more Online Reader
rtf txt
Price: Free! USD
Add to Library
Create Widget
Tags: call options put options options for rookies
About Mark D Wolfinger

I first began trading options in 1975; just two years after the CBOE (Chicago Board Options Exchange) opened its trading floor. My strategy of choice was writing covered calls.

In late 1976, I was employed by Monsanto Company as a research chemist when a friend bought a seat on the CBOE. We had lengthy discussions about his new venture. Long story short, he gave me an opportunity to come to Chicago and trade as a market maker as the nominee for someone who owned a seat on the exchange, but who did not want to trade himself. I accepted, quit my job and drove to Chicago. That was December 20, 1976 and my life changed forever.

I'm still in the options business, 37 years later. I left the CBOE trading floor in the year 2000. Since that time I've been trading my own account — just as you do — as a retail customer. But, I added something new when I began writing and teaching others how to trade options with a conservative bias. My first book was published in 2002 (The Short Book on Options) and others followed.

I published a blog for several years, and the contents are still available. My current projects include a) developing this blog at about.com and would love to hear from you with comments, questions, requests for topics to discuss, etc., and b) writing a series of eBooks on individual option strategies.
My books:
• The Rookies Guide to Options, 2nd Edition (2013)
• Create your own Hedge Fund (2005)
• The Short Book on Options (2002)

You have subscribed to alerts for Mark D Wolfinger.

You have been added to Mark D Wolfinger's favorite list.

You can also sign-up to receive email notifications whenever Mark D Wolfinger releases a new book.