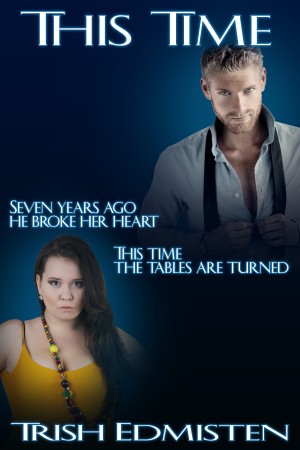 Chelsea Schumacher always knew this day would come. Sooner or later, she would have to face Justin Jacobs, the guy who broke her heart when she was just seventeen years old. With his brother about to marry her best friend, that day is finally here. It’s been seven years since she last saw Justin, but time has done nothing to dull the pain of his rejection. If anything, the ache has grown worse. Determined not to let him have any power over her, and more determined not to ruin her best friend’s wedding, Chelsea makes her own vow. Things will be different this time. Or will they?
Available ebook formats: epub mobi pdf rtf lrf pdb txt html
First 20% Sample: epub mobi (Kindle) lrf more Online Reader
pdb
Price: $0.99 USD
Buy Add to Library Give as a Gift
How gifting works
Create Widget
Tags: love romance erotic wedding past future regret plussize fun future present sexy
About Trish Edmisten

Author of YA and contemporary romance.

Reviews of This Time by Trish Edmisten

I have been waiting for this book to come out ever since Trish mentioned the idea of writing a spin-off for Justin Jacobs, who just so happens to be a kick-ass character and one of my favorite people in Like You Mean It. I always thought that as much as I loved Like You Mean It, I wanted more screen time for Justin. Now, I got exactly what I wanted.

This Time picks up seven years after everything that happened in Like You Mean It. It was a little more time than I would've liked, however, by the end of the book, I saw why it had to be like this. We follow the story in Chelsea and Justin's POV, and I gotta admit I really dug that. I liked knowing what each of them were thinking, especially because just like Chelsea, I can be a little insecure. I know how hot and gorgeous Justin is (that isn't all there is too him, he's a character with layers, and I love that about him), so it can be a little intimidating. Although Chelsea on her end could be intimidating too. They're both characters with strong attitudes. It's one of the main things I love about Chelsea. Even though Justin is tough too, I loved that he was about to take a step down a few times. Chelsea is definitely great at taking control;)

When I first heard of the idea of Justin having his own book, I never in a million years pictured he would go back to Chelsea. Not that they dated or anything, but they have history--history that stings in my heart every time I think about it. I loved the reassurance I felt from Justin's character (a lot of the time, I'm all about reassurance--I can be insecure, especially with characters). I can see clearly why Chelsea was on the fence not only with seeing Justin for the first time in years, but also for being scared as to how things would play out between them or if Justin would even care.

I cringed at the thought of there being another woman that would give Chelsea competition for Justin's heart. Chelsea seemed a bit scared with what was already happening, I'm really happy Justin gave her no other reason to worry.

I LOVED This Time. I didn't want it to end. I read it in just a few hours and I wanted more. I already can't wait for the next book in the series. I'm excited for both Chelsea and Justin. I was so happy to see my other favorites in the series, like Gerald and Marcy. Heck, I even warmed up to Nick. Once again, Nick was a character that I hardly noticed in Like You Mean It. The times I did know he was there, he annoyed me (no matter how cute Marcy thought he was). Now, it was really refreshing to read about him in this different light. Gah, I can't even put to words how excited I am for this series. I already want to continue reading about Chelsea and Justin! Loved loved loved this book, and I definitely recommend it to anyone who wants to have fun reading a funny, witty, sexy story about two very awesome, strong, and lovable characters!

You have subscribed to alerts for Trish Edmisten.

You have been added to Trish Edmisten's favorite list.

You can also sign-up to receive email notifications whenever Trish Edmisten releases a new book.