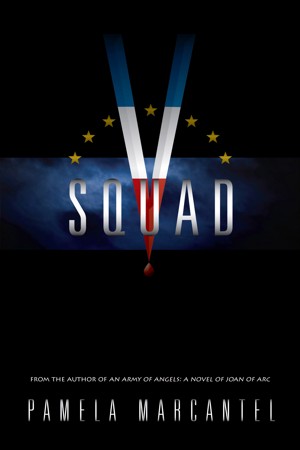 Rated 5.00/5 based on 2 reviews
A character-driven vampire novel for grownups set during World War II. More Interview with the Vampire than Twilight. In fact, nothing like Twilight.

1943, the dark days of World War II. Vampires in league with the Nazis plan to murder Prime Minister Churchill and the Allied High Command, and the only other person who knows about the plot is 753 years old. More
In August, 1943, millionaire vampire John English informs President Roosevelt that Nazi-aligned vampires intend to assassinate Winston Churchill and the principal Allied generals before they can complete plans for the D-Day invasion of France. In exchange for safe passage across the Atlantic, English volunteers to raise a group of his fellow vampires to prevent that from happening.

Roosevelt responds to English’s request by providing an OSS operative, Lieutenant Edwina Kelly, to act as liaison between them. At first resistant to working with the undead because of her family’s troubled history with vampires, Edwina gradually yields to the mysterious John English’s charisma. In time he reveals to her his own dark past, his ties to the evil Longchamps, leader of the Nazi vampires, and his real reason for aiding the Allies.

Pamela Marcantel is the author of V-Squad and An Army of Angels: A Novel of Joan of Arc. She lives in Charlottesville, Virginia.

Reviews of V-Squad by Pamela Marcantel

This amazing book by Pamela Marcantel deliciously puts the reader in the heart of a very unique story. John English is a centuries-old millionaire vampire alive (sort of) and well during World War II. English is also an American patriot. When he learns of a plot to assassinate William Churchill and members of the Allied High Command by Nazi-aligned vampires, he enlists the aid of an unusual group of his fellow vampires to help him prevent this tragedy from happening. Though they are a small band of self-appointed patriots, they each bring a unique talent and perspective into the situation. Among them are a psychic, a ninja and a cowboy. While on the surface this grouping of people may seem to the reader to be a bit of a stretch, Marcantel fleshes out these characters quite nicely, allowing the reader to understand their individual backgrounds and making the reader feel as if these characters are old friends. English arranges to meet with President Roosevelt and offers his services to the President in exchange for a safe passage to England, where he and his fellow vampires will fight the Nazi vampires, led by English’s nemesis, the very, VERY evil Longchamps. Longchamps is by far the most evil of all vampires, the devil personified, who makes Adolph Hitler look like Rebecca of Sunnybrook Farm. Roosevelt sends the very beautiful but no-nonsense Lieutenant Edwina Kelly to accompany the vampires in their effort to win the war. To give away any more of the story would be to do the reader a great disservice.

V-Squad grabs the reader into the story from the very beginning as if Marcantel is saying, “Hang on to THIS roller-coaster – we’re going for a ride!” And what a ride it is! Ms. Marcantel’s style of writing is so descriptive, one can easily see the places and people, smell the smells, and experience all this very engaging story has to offer. Along the way, the reader will laugh and cry as the author so wonderfully connects the reader and the characters. The writing is so descriptive it is like watching a movie. This very hard-to-put-down book is a fast-read, with clever plot devices near the end that will leave the reader wanting more. Hopefully, this will be the beginning of a long series of books with these characters. Even more, this book HAS to be made into a movie! To not do so would be an injustice!

Unlike the Twilight series, which is geared toward “tweens and teens”, this book is definitely geared toward late teenagers, as well as young and older adults, due to its graphic descriptions of violence and a little bit of coarse language. However, Marcantel’s style of writing is such that one finds oneself overlooking any images of violence, as they are part and parcel of the story. Even the violence is oddly quite engaging. I highly recommend this book to anyone who is a fan of the vampire genre. Not only will the reader be taken on a great thrill-ride, they may even learn a bit of history along the way. Get the word out about this book – it’s too good to miss! Hollywood – are you listening?

(reviewed 4 months after purchase)
monica lafleur reviewed on May 3, 2011
(no rating)
Great Book!!
A whole new angle on Vampires. Love the charcaters. Can not wait for the story to be continue.

(reviewed 25 days after purchase)
Jude Chachere reviewed on May 1, 2011

Pamela Marcantel is a gifted storyteller who tackles the Vampire genre with a new and interesting take. Twilight, this ain't. And that's a good thing.

You have subscribed to alerts for Pamela Marcantel.

You have been added to Pamela Marcantel's favorite list.

You can also sign-up to receive email notifications whenever Pamela Marcantel releases a new book.