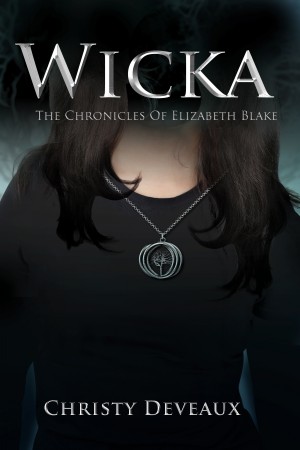 WICKA: The Chronicles of Elizabeth Blake

Wicka, the debut novel by Christy Deveaux, has been compared to other fantasy paranormal tales such as Twilight, written by Stephanie Meyer and Harry Potter, written by J.K. Rowling. Young adults and grown ups alike are sure to love this adventure filled magical romance.

I truly enjoyed Wicka, a paranormal fantasy with love, jealousy, betrayal, and of course, magic. Young adult-friendly, the book contains its own mythos that really added to the interest in the story for me. It has a truly original take on witch lore, with its own quirks and novelties, that enrich the existing idea of witchcraft. The interpersonal story here is also compelling, and it’s perfect for teens. All in all, fantastic. ~ Sam G.

Christy Deveaux is the author of The Chronicles of Elizabeth Blake series (former #1 Amazon best seller in Children's Paranormal & Urban Fantasy Books). Her highly anticipated first book in the series, WICKA, was released in 2014. Inspired by traveling across Europe solo at a very young age, and many travel adventures since, the character and story line behind Elizabeth Blake was born. Christy majored in political science and earned a cross-disciplinary degree from the University of Western Ontario. She lives in Toronto, Ontario with her husband, three children and a fish named Cow.

Please watch the information book trailer under the video section of this page! Note: This presentation contains images that were used under a Creative Commons License. Click here to see the full list of images and attributions: https://app.contentsamurai.com/cc/23782

Meet The Characters
Meet the characters and learn about their special witch powers.

I have always been a huge fan of paranormal, romance, magic, and mystery so I was rather certain that I would enjoy reading Wicka: The Chronicles of Elizabeth Blake. I desperately wanted to love this book and really did. The problem with this is that I shouldn’t have. Let me explain.

Perfect for teens, young adults, and adults alike, Wicka is an easy, enjoyable read. Christy introduces well developed, likable characters and a storyline that flows easily and invites you in. I was engaged after just a few pages and didn’t want to put the book down even after reading the final page. It really was a good read and one that I would recommend.

The problem is, Wicka: The Chronicles of Elizabeth Blake reminds me of books that I have already read. The characters may have different names, there may be a few twists in the theme, but the overall idea isn’t new. What I found most difficult while reading was feeling as thought I was reading a version of Twilight. Again, different names, changes to the theme, but to me, I felt like I was reading Twilight; to the point that I started picturing characters from the Twilight movies when I was reading Wicka. That isn’t a good thing. Anytime I read a book I am looking for originality and to a point that was lacking in this novel.

Perhaps even a more glaring problem was the structure of the read. The main character of the book, Elizabeth, is supposed to be a young girl/woman from Michigan. The book is written from her point of view; however, the writing favored that of a British novelist. As an American, this was somewhat off putting as this should have all been corrected prior to the book being released. There were also times when I was confused by the dialogue in the book and I had to go back and reread sections to come to a term with who was saying what and what was happening. I believe the book would benefit a great deal from going through proofreading.

That being said, I still really enjoyed the novel. I just question if I enjoyed the read because I enjoyed Wicka or because I am a Twilight fan. Even now, as I write this, I’m not certain. I would love to see what happens with Elizabeth and William next, I just hope that Christy will find strength and confidence in her own voice instead of pulling inspiration from other established (Twilight … Harry Potter) novels.

Disclaimer: I received a complimentary copy of Wicka: The Chronicles of Elizabeth Blake to facilitate this review. Regardless, all opinions expressed are still 100% my own.

Elizabeth Banks, a 17year old from Ann Arbor Michigan, jumps at the opportunity complete her Senior Year of High School in France when her life is turned upside down at the death of her Best Friend's Mother. Once in Europe things take an interesting twist when she discovers that she is a descendant of the Harlow Family, one of the oldest and most powerful Witch bloodlines. She also learns that The Elders (a very powerful Coven) believe that she is described in an ancient legend about a battle led by “One barely born existing to lead” would cause the downfall of the Elders. Needless to say, they have been keeping an eye on her since she was born. As if being a teenager witch wasn't tough enough, Elizabeth struggles with school work, her new found powers, and a love triangle involving her friend (and fellow Witch) William and her friend Sophie who is also in love with William. This makes her vulnerable to the Elders, and as time runs out, Elizabeth must learn to use the powers she possesses to protect herself and the people she loves most.

A lot happens very quickly in this book, I never found myself bored while reading the story. It was a real page turner. Young Adult Paranormal Fantasy jam packed with family, friendship, love triangles, betrayal and magic.

I received a copy of this book complimentary for review purposes. My opinions are 100% my own.

You have subscribed to alerts for Christy Deveaux.

You have been added to Christy Deveaux's favorite list.

You can also sign-up to receive email notifications whenever Christy Deveaux releases a new book.