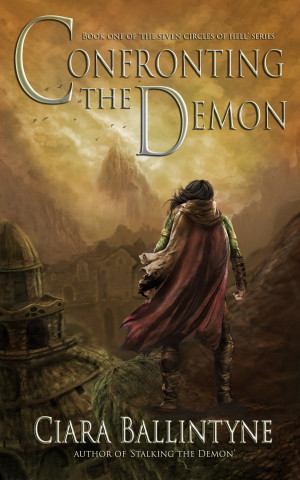 By Ciara Ballintyne
A disgraced wizard must face his demons to save the woman he loves from hell. More
For lovers of Jacqueline Carey, Brent Weeks and Storm Constantine - fantasy with mystery, romance and a paranormal twist.

For Alloran, who practised the fine art of frivolity for decades, life just got serious.

Framed for the heinous crime of demon summoning, he is forced to flee his comfortable life of silk sheets and nightly carousing in the wizard’s citadel for the stinking back-alleys of the city of Ehsan. There he poses as a common labourer to hide from his lover, his best friend and the wizarding authorities.

But beneath the garbage of the backstreets he discovers a new horror: a trail of gruesome bodies, gnawed on by hellcats, and left gift-wrapped for him to find with taunting ‘love notes’ attached. Someone is brutally murdering people from Alloran’s past and threatening all those close to him.

As the body count rises, Alloran must confront his personal demons and risk losing himself to a powerful addiction in order to expose the true villain. Failure means the destruction of the city at the hands of the deadliest demon to inhabit any of the seven hells – or worse, Alloran himself.

Who stole a lethal song of power from a locked and warded room, and why? The answers will change Avram's life forever.

Praise for CONFRONTING THE DEMON

“Ballintyne is a masterful storyteller who manages to get you caught up in the book almost instantaneously... I actually enjoyed a good fantasy novel that didn’t take days and days to read, but still offered the opportunity to get caught up in its world and story.” - Tracy Riva, Global eBook Awards Judge

"This story wasn't quite what I expected; it was better! The first pages surprised me, reminding strongly of THE WAY OF SHADOWS by Brent Weeks (the scenes, setting and story feel). I was immediately drawn in." - Dr. S. Drecker

“The power-packed action will leave you breathless and the eerie suspense will make you chomp on your own nails, beware!” - Satarupa, Curse of the Bibliphile

“With imagination and detail that paints a full scene for the mind’s eye, Ciara takes us on a short but exciting journey into a world of magic, love and demons from hell.“ - Miranda Wood of DustyKatt’s Stuff Reviews

"The pace is phenomenal not only because it is fast and keeps the plot moving forward but because there is such a wealth of information in so few words! I could've read more and more for hours and hours, but Ballintyne wraps it all up in one suspenseful, tidy package." - A_TiffyFit
Download: epub mobi (Kindle) pdf more Online Reader
lrf pdb
Price: Free! USD
Add to Library
Create Widget
Tags: demon fiction mystery fantasy tentacle monster time travel adventure romance wizard paranormal romance wizard adventure fantasy black magic and murder
About Ciara Ballintyne

Ciara Ballintyne grew up on a steady diet of adult epic fantasy from the age of nine, leaving her with a rather confused outlook on life – she believes the good guys should always win, but knows they often don’t. She is an oxymoron; an idealistic cynic.
She began her first attempts at the craft of writing in 1992, culminating in the publication of her debut work, Confronting the Demon, in 2013.
She holds degrees in law and accounting and is a practising financial services lawyer. In her spare time, she speculates about taking over the world – how hard can it really be? If she could be anything, she’d choose a dragon, but if she is honest she shares more in common with Dr. Gregory House of House M.D. – both the good and the bad. She is a browncoat, a saltgunner, a Whedonite, a Sherlockian, a Ringer and a Whovian… OK, most major geek fandoms. Her alignment is chaotic good. She is an INTJ.
Ciara lives in Sydney, Australia, with her husband, her two daughters, and a growing menagerie of animals that unfortunately includes no dragons.

About the Series: The Seven Circles of Hell

A wizard's addiction to puzzles may spell the end of the world.

Also in Series: The Seven Circles of Hell

You have subscribed to alerts for Ciara Ballintyne.

You have been added to Ciara Ballintyne's favorite list.

You can also sign-up to receive email notifications whenever Ciara Ballintyne releases a new book.