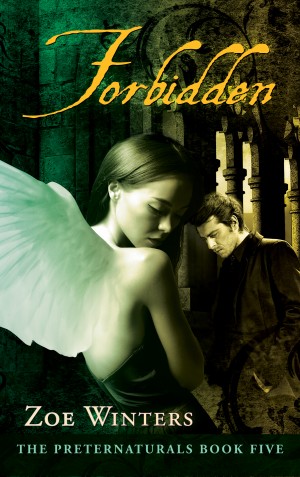 Angeline knows Father Hadrian will never forgive her for their ugly history. When the king of the vampires seeks vengeance for Hadrian's recent betrayal, she'll risk everything to protect the vampire she still loves.

But when she agrees to give Hadrian her blood, all of Heaven will break loose. More
… To see him again is forbidden.

Angeline knows Father Hadrian will never forgive her for their ugly history. When the king of the vampires seeks vengeance for Hadrian's recent betrayal, she'll risk everything to protect the vampire she still loves.

But when she agrees to give Hadrian her blood, all of Heaven will break loose.

The start of Hadrian and Angeline’s story is in a novella called Dark Mercy. Because it is so integral to the events of Forbidden, Dark Mercy has been included here first. You can use the TOC to choose which order to read them or to skip ahead to Forbidden if you’ve already read Dark Mercy.

Forbidden can be read out of order from the rest of the series, but as always, the various interconnections between the background characters make more sense read in order.

… Forgive me Father, for I’m about to sin.

Angeline has been on the run from her vampire sire for centuries. She’s tired and lonely. High from mescaline-infused blood, she receives a sign—a glowing church in the distance. And she knows. Her future mate is in that building.

The only trouble? Hadrian is a devout priest. It will take strong persuasion for him to see the world her way.

Books in the Preternaturals Series:

About the Series: The Preternaturals Series

Everyone is the hero of his own story.

8 couples across various preternatural species (vampires, demons, angels, magic users, werewolves and other shapeshifters) find love in sometimes forbidden and unexpected places while fighting the others in a struggle for control of all the factions.

This series is complete and contains 6 books. Each book can work as a stand alone.

Also in Series: The Preternaturals Series

A great addition to the series.

Warning: Do not attempt to read this book before bed if you work tomorrow unless you like looking like a zombie on too much caffeine.

I started reading Forbidden last night and figured I'd read 'til I started getting sleepy, usually 20 pages more or less does it for me. It didn't quite work out that way I turned the last page just as the sun rose this morning. It was that good. I got totally lost in the story and lost track of time, it's been awhile since that has happened.
Forbidden by Zoe Winters is book 5 in The Preternaturals series. Yes, it can be read as a stand-alone. I promise you won't get lost when characters from previous books in the series are introduced. A bit of a warning though once you're done you're going to want to read the earlier books just because their stories sound so intriguing.

There are actually two parts to the story of the former nun turned vampire Angeline and Father Hadrian. The first a novella titled, "Mercy" and is included in the book as a prequel. Thumbs up to Ms. Winters for that move.
Sixty years after turning Father Hadrian into a vampire Angeline is back in Forbidden only now she is an angel! Nice move huh?

Despite having a new life Angeline is not over Hadrian and has been keeping tabs on him from heaven. Father Hadrian is not your typical evil spawn of Satan vampire but he has managed to make some enemies and when he is attacked despite it being forbidden Angeline comes down on them well like an avenging angel and that's when the story heats up.

Forbidden is a great read, I highly recommend it and am looking forward to the next book in this series.

You have subscribed to alerts for Zoe Winters.

You have been added to Zoe Winters's favorite list.

You can also sign-up to receive email notifications whenever Zoe Winters releases a new book.