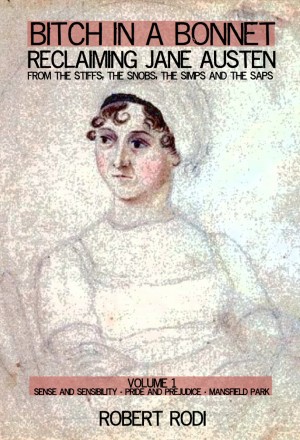 Bitch In a Bonnet: Reclaiming Jane Austen from the Stiffs, the Snobs, the Simps and the Saps (Volume 1)

Robert Rodi was born in Chicago in the conformist 1950s, grew up in the insurrectionist 1960s, came of age in the hedonist 1970s, and went to work in the elitist 1980s. This roller-coaster ride has left him with a distinct aversion to isms of any kind; it also gave him an ear for hypocrisy, cant, and platitudes that allowed him, in the 1990s, to become a much-lauded social satirist.

After seven acclaimed novels set in the gay milieu, Robert grew restless for new challenges—which he found in activities as wide-ranging as publishing nonfiction, writing comic books, launching a literary-criticism blog, and taking to the stage (as a spoken-word performer, jazz singer, and rock-and-roll front man).

In 2011, excited by the rise of digital e-books, he returned to his first love, publishing new fiction inspired by the work of Alfred Hitchcock. He also organized the republishing of his seminal gay novels under the banner Robert Rodi Essentials.

Robert still resides in Chicago, in a century-old Queen Anne house with his partner Jeffrey Smith and a constantly shifting number of dogs.

You have subscribed to alerts for Robert Rodi.

You have been added to Robert Rodi's favorite list.

You can also sign-up to receive email notifications whenever Robert Rodi releases a new book.