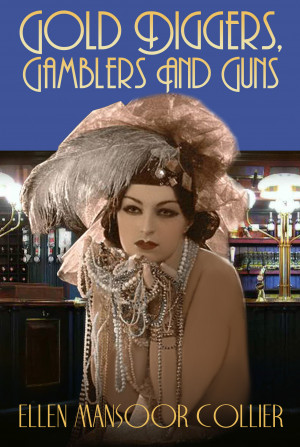 By Ellen Mansoor Collier
Galveston Gazette society reporter Jazz Cross longs to cover hard news, but she's stuck writing up gossip tidbits. When Fed Agent beau James Burton is framed for murder, they must prove his innocence. Downtown Gang leader Nounes forces her barkeep brother, Sammy Cook, to do his dirty work. After a bookie is murdered, Jazz delves into the gambling underworld. A soft-boiled historical mystery. More
During Prohibition in 1920s Galveston, the Island was called the "Free State of Galveston" due to its lax laws and laissez faire attitude toward gambling, girls and bootlegging. Young society reporter Jasmine (Jazz) Cross longs to cover hard news, but she's stuck between two clashing cultures: the world of gossip and glamour vs. gangsters and gamblers.

After Downtown Gang leader Johnny Jack Nounes is released from jail, all hell breaks loose: Prohibition Agent James Burton’s life is threatened and he must go into hiding for his own safety. But when he’s framed for murder, he and Jazz must work together to prove his innocence. Johnny Jack blames Jasmine’s half-brother Sammy Cook, owner of the Oasis speakeasy, for his arrest and forces him to work overtime in a variety of dangerous mob jobs as punishment.

Ellen Mansoor Collier is a Houston-based freelance magazine writer whose articles and essays have been published in several national magazines including: FAMILY CIRCLE, MODERN BRIDE, GLAMOUR, BIOGRAPHY, COSMOPOLITAN, COUNTRY ACCENTS, PLAYGIRL, etc. Several of her short stories have appeared in WOMAN'S WORLD. A flapper at heart, she’s the owner of MODERNEMILLIE on Etsy, specializing in Deco to retro vintage items. Formerly she's worked as a magazine editor, and in advertising and public relations. She graduated from the University of Texas at Austin with a degree in Magazine Journalism and was active in WICI, serving as President her senior year, as well as the campus magazine UTmost. During college, she worked as a cocktail waitress one summer, a short-lived experience. FLAPPERS, FLASKS AND FOUL PLAY is her first novel, followed by BATHING BEAUTIES, BOOZE AND BULLETS, GOLD DIGGERS, GAMBLERS AND GUNS, VAMPS, VILLAINS AND VAUDEVILLE and DECO DAMES, DEMON RUM AND DEATH, inspired by real-life rival gangs, historical events and Galveston landmarks and legends.