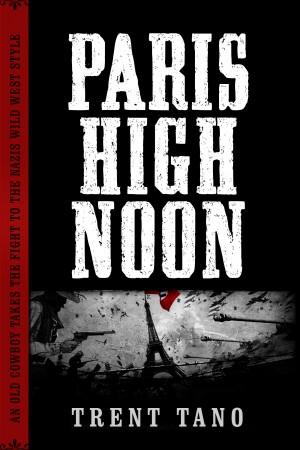 By Trent Tano
On a desolate Parisian boulevard, William "Catfish" Hancock, former confederate of Butch Cassidy's Wild Bunch, guns down six Nazi soldiers. With the help of cafe garcon Jean Malheur, Catfish forms a gang of French outlaws to take the fight to the Nazis, Wild West style. More
William "Catfish" Hancock, who rode with Butch Cassidy's Wild Bunch, back in the 1890's, has retired to Paris in the late 1930's. When the Nazis invade, he straps on his six gun for one last showdown. With the help of café garçon Jean Malheur, Catfish gathers a gang of French outlaws and brings the fight to the Nazis, Wild West style. From rustling horses to robbing banks, Catfish leads La Bande Sauvage to the Spanish border, all the while out running the SS posse.

With an old cowboy is putting up more of a fight than the whole French army, the Nazis send in their number one man killer, SS Major Bartholomew Schwartz, a.k.a. Black Bart, a man who shares a secret past with Catfish. For Black Bart knows that in order to catch the old cowboy, he has to think like one.

At the border, Catfish pulls reign and turns back around. He knows that you can outrun a posse, but not the consequences that sent them out. With the Nazis holding his pard, Hiccup, Catfish is determined to break him out or die trying. Teaming up with a cabaret chanteuse and a team of SOE agents, Catfish and La Bande Sauvage take on Black Bart's SS gunfighters, in a high noon showdown.

Word Hustler Trent Tano grew up in Santa Cruz County as an avid reader; devouring epics such as “The Chronicles of Narnia” and “Lord Of The Rings” at an early age, drawn to the series’ framework of ‘the hero’s journey,’ which would come to later have a heavy influence on his work.

It wasn’t until after he graduated from high school and started his stint in the United States Army, however, that Tano first became seriously interested in writing himself—while on leave a friend gave him a copy of Charles Bukowksi’s “Notes of A Dirty Old Man,” which he proceeded to take back with him and read.
“I was stationed in Germany, and this guy’s talking about drinking, gambling, fuckin’ whores—just living life—and that was pretty much what we were doing,” Tano laughs.

With the realization that one could write about anything they really wanted to, Tano discovered the Beats, the Classics, and eventually, the Western, opening up the long, dusty, and hard fought path that looks to be about to pay off as handsomely as a Wild Bunch holdup of a Union Pacific flyer.

Tano’s new novel “Paris, High Noon” is the culmination of several years’ work, an ingeniously creative tale that introduces the character of William “Catfish” Hancock, an outlaw who roamed the Wild West with the likes of Butch Cassidy, rode with Teddy Roosevelt’s Rough Riders, and fought against the Kaiser at the Battle of Belleau Wood.

“I basically based ‘Paris, High Noon’ on ‘Lonesome Dove’—if you’re going to write a Western, you might as well choose the one that won the Pulitzer as your model,” says Tano. “I wanted ‘Catfish’ to be my Gus McCrae.”

When “Catfish” starts reaching the twilight of his time here on Earth, he’s living in Paris, an ex-pat cowboy who goes from telling tall tales on the lecture circuit to suddenly finding himself in the middle of the Nazi invasion, with one last chance for a proper six gun showdown.

“I’ve always thought that the Western was the best canvas to paint the human condition—and I liked the idea of having this character get caught up in these major events that really shaped a lot of the culture in America,” says Tano.

Readers are bound to be caught up in “Paris, High Noon” themselves, with a fast-paced, action-packed storyline that is a guaranteed page-turner. With a little more time, hustle and the right match to light the fuse on the phenomenon, the public should be able to rustle up their own copy in a major bookstore soon.

You have subscribed to alerts for Trent Tano.

You have been added to Trent Tano's favorite list.

You can also sign-up to receive email notifications whenever Trent Tano releases a new book.