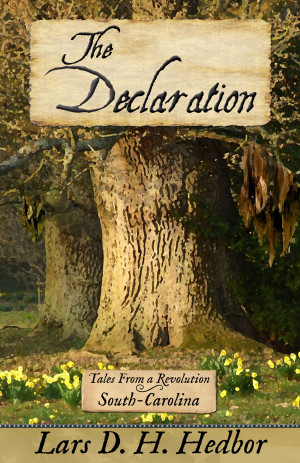 The Declaration: Tales From a Revolution - South-Carolina

By Lars D. H. Hedbor
Rated 3.00/5 based on 1 reviews
A hardworking tobacco farmer in the Carolina Uplands, Justin Harris wants only to provide for his family. The outbreak of revolution turns his life upside down, and he cannot anticipate how even his seemingly most inconsequential actions will touch the lives of generations yet to come. Through crushing setbacks and hard-won victories, Justin’s perseverance serves as a gift to his descendants.

I am an amateur historian, linguist, brewer, fiddler, astronomer and baker. Professionally, I am a technologist, marketer, writer and father.

My love of history drives me to share the excitement of understanding the events of long ago, and how those events touch us still today.

Also in Series: Tales From a Revolution

Katie Harris, near modern day Charleston, is helping her grandmother clear her house in preparation for moving into a nursing home. Starting in the attic Katie finds an ancient trunk bearing the name ‘Elizabeth Harris.’ Inside she finds letters and documents dating to the Revolutionary period. An historian from the university arrives to authenticate them and uncovers an even more earth-shattering and plan changing discovery. Nearly two-hundred and fifty years earlier Justin Harris ekes a living on his tobacco farm on the same piece of land that Katie’s Gram occupies today, however, his dreams of peace and prosperity are haunted by the growing rebellion. Risking all by joining the Whigs’ cause, Justin earns a commendation for his heroism in defense of Charles Town, but it comes with hefty price.

This homey tale continues relating the stories of two generations of the Harris family separated by more than two centuries. Being a fan of both history and genealogy, this book had much appeal for me. I am also greatly enamored of Charleston and the Low Country in general, so all aspects of The Declaration were calling me. However, I must offer a constructive criticism: the dialogue is unconvincing. The characters never speak to one another without referring to each other by name. If a husband and wife are talking, how frequently do they call each other by their proper names? I was particularly bothered by the conversation of the slave, Terrance, who spoke like he had been educated at Eton and referred to Justin as “Mister Harris” instead of “Massa.” Ignoring the overly formal speech and the political correctness, Lar D.H. Hedbor’s Declaration is worthy of attention.

You have subscribed to alerts for Lars D. H. Hedbor.

Would you like to favorite Lars D. H. Hedbor?

You have been added to Lars D. H. Hedbor's favorite list.