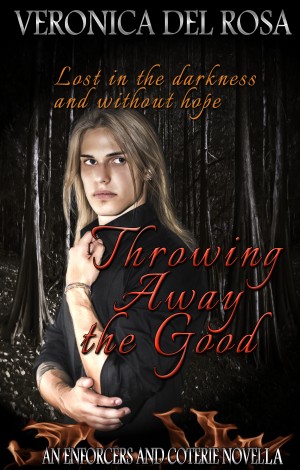 Throwing Away the Good

Rated 4.83/5 based on 6 reviews
A slave to the Fae, Karl never expected a chance at freedom, but can he trust the two Fae willing to help him? He's seen the cruel, vicious side of the race, can he believe in the compassionate side? More
A novella in the Enforcers and Coterie series, Throwing Away the Good delves deeper into a world where magic co-exists peacefully with the ordinary, for the most part . . .

Karl can’t remember life before the Fae. He can’t even remember his own last name. Abducted as a small child by the faeries, he lives as a slave and dreams of freedom. He’s learned to remain quiet and obey his master to avoid beatings.

As an adult, he has the chance to escape, but can he trust the two unknown faeries who want to help him? He’s seen the cruel, vicious side of the race. Can he believe in the compassionate side?

If he chooses wrong, it’s not just his life at stake, but the woman he loves.

An avid reader, I enjoy paranormal romance, urban fantasy and fantasy books. It wasn't a far stretch for me to write a paranormal fantasy. I'm also a computer/sci-fi geek and I've been in computer field for well over 15 years.

Also in Series: Enforcers and Coterie

A short, action packed and somewhat 'steamy' book.
Within this story you get a teasing glimpse of the characters and the world that will, no doubt, be expanded upon in the following books.
A great little introduction to the Enforcers and Coterie series.

'Throwing Away The Good' was an intriguing novella about Karl. I enjoyed his story. Wendy played an important part in his transition from slave to free man. Some hot and steamy parts too. A great addition to a great series. I look forward to reading the next book. Recommended read.

This novella was definitely an interesting look into the Fae side of the world that Del Rosa has built. This glimpse where outer beauty is mandatory is both thrilling and horrifying. Karl is a human whose beauty has captivated the Fae since he was a small child, and he pays for it in slavery. He has been rented out to any Fae who can pay the price, but he never loses his sense of self. Rather, he buries it deep until the moment comes when he can finally escape, and take another slave with him. Watching Revenant and the mysterious Rose Petal in action was a treat, and I can't wait to hear more about them in the future. The love between Karl and Wendy is blistering and sweet all at once. This is only a short story, but it gives you a great first taste of Del Rosa's imaginative writing style, and clearly sets up a fraction of the larger world in The Coterie series.

Rarely am I a fan of short stories. I'm always wary of freebies. And I never, ever read books from unknown authors with a handful of ratings that are undoubtedly from friends and family. So imagine my surprise at uncovering this little gem. I loved it! Great pacing, well-rounded characters, and an engrossing plot. I adored Karl, and there were several moments I was so moved by him and his inner strength. Glimpses of secondary characters, like Revenant, were perfect little morsels to bait my interest, too. The author has laid down some good bones for worldbuilding, and I can't wait to see how it all unfolds. Highly recommended for PNR/UF fans who like their fae on the scary side.

This is a wondrful read, immersing you into the world of fae and the hero, Karl, as he fights to gain his freedom. What I love about this book is the depth of character development even for the players who only make a one-scene appearance. A delightful short read.

Having already read Veronica Del Rosa's Magic Resistant, I went into this novella already having a strong feel for the world of the Enforcers and Coterie. The thing is, this novella doesn't really take place within that world, it's mostly in Fae, or rather it's mostly about Karl and about what is in his head. Karl just happens to live inside Del Rosa's world. I highly suggest reading this first! But if you don't, read it anyway.

What can I say about this novella? It's pretty hot. I mean, it's steamy, really steamy, as it should. Karl is a slave owned and rented out by one of the Fae to service other Fae. Karl is beautifully sexy and has this innocence about him that just melts your heart. He is 100% not my type of male character or otherwise, but it didn't matter. He's the kind of character that you want to care for. He was stolen as a child and retains a lot of childlike qualities. He has a sense of fairness, he wants to share, he feels a need to protect. Which makes him sound almost too good to be true, but he's very, very human. He's real. That is the thing about the way Veronica Del Rosa writes, her characters do not simply come to life, they are alive. You do not simply believe her story, you want to visit the place her stories take place. You want Karl to look at you that way. You want to look at him in a way to make him look at you with that grin. Yes please.

Yet, this novella with it's steam is not a mere smut book. Del Rosa does not write smut, she includes a very healthy sex scene, but her stories are about people and what they are dealing with and how they deal with their issues. Karl is not just a gorgeous face, he's got some issues. Baggage created by nearly 20 years being a slave to the Fae. Living in protected and yet hard circumstances, he managed to never break. Instead, Karl became his own man during his years of imprisonment. He's not a bad guy but he sure as hell isn't going to be a good guy either. He is a multifaceted character that you will grow to want to know...and good luck with that.

What can I say about this novella other than READ IT! Trust me, you will not regret jumping into the to world of the Enforcers and Coterie. You will want more and lucky for us, this series is just getting started!

You have subscribed to alerts for Veronica Del Rosa.

You have been added to Veronica Del Rosa's favorite list.

You can also sign-up to receive email notifications whenever Veronica Del Rosa releases a new book.