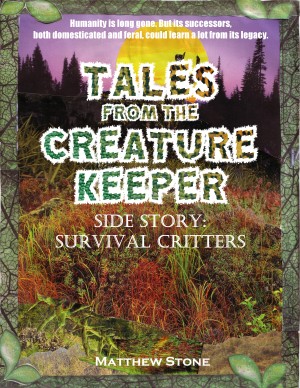 By Matthew Stone
Rated 4.00/5 based on 1 review
In an age of rediscovery, various "tribes" are digging up the remains of humanity and using them to re-establish civilizations. When four of these tribesfolk set out to practice living in the wild though, they have bigger concerns like how to not get eaten by wandering bears, escaped genetic experiments, and giant spiders. They almost don't even get leftover pastries to see them through the trip. More
Welcome to a world where gene splicing is considered an art form, people are trying to push back nature and reestablish civilizations, and ancient remains, our remains, are dug up and studied, including every game, video, and meme that ever circulated through the internet. Have you ever wondered what future civilizations might think of us or what sort of legacy we might leave behind after climate change and widespread corporate and political corruption kill us all off?

There is a tendency to confuse Matthew Stone with a certain famous producer who is best known for creating the show "South Park". Matthew Stone actually tore himself away from Matt Stone years ago through sheer force of will, similar to how Nei was born from Neifirst in Phantasy Star 2.

He is a mediator and contributor for The Sanctuary Crew, a group of gaming enthusiasts who regularly livestream their favorite old and new games. In 2008, he and his family fled to Northern Washington due to the increasingly hostile weather in the Midwestern United States. From their elevated cabin, they expect to be perfectly safe when global warming causes most of the Olympic Peninsula to vanish underwater.

Tales from the Creature Keeper began as a series of short stories about his toys, but grew in size and maturity as he did. Now they're both too big, but Mr. Stone can get away with it because he's 6'5" and enjoys cycling, while the book... well, it remains to be seen if the book can get away with it that easily. 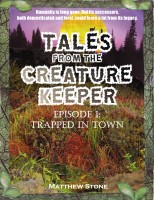 Reviews of Tales from the Creature Keeper: Survival Critters by Matthew Stone

While not stayed, it feels like the target audience is young adults and/or children old enough to play video games with weapons in them.

I have not read the related story, and this stood by itself nicely.

You have subscribed to alerts for Matthew Stone.

You have been added to Matthew Stone's favorite list.

You can also sign-up to receive email notifications whenever Matthew Stone releases a new book.