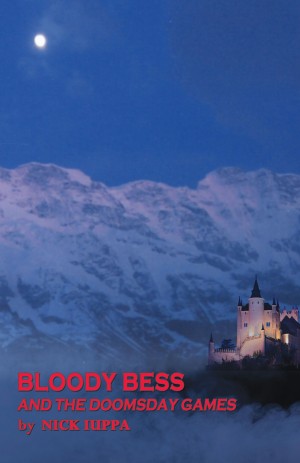 Bloody Bess and the Doomsday Games

By Nick Iuppa
What if the fate of the world depended on the outcome of a vast military simulation, which was suddenly taken over by vampires? More
The castle of 15th century duchess Elizabeth Laskaar looks down on the little Swiss village of Murdenwald and the secretive military complex nearby. There, the UN hopes to end world conflict with a vast military simulation that will dramatize the apocalypse that will follow the next major war. To head the project, they hire notorious Hollywood producer Donald Vito, master of explosive action adventures, who still mourns the murder of his teenage love in the 1950s.

Vito and the simulation team use new technology to build hundreds of virtual soldiers and terrorists you can touch, speak to, and reason with. But they also begin to feel the influence of Elizabeth Laskaar. She’s often called Bloody Bess – the first real vampire – because she maintained her youthful beauty by slaughtering her maidservants and bathing in their blood.

Nick Iuppa began his career as an apprentice writer with famed Bugs Bunny/Road Runner animator Chuck Jones and children’s author Dr. Seuss. He later became a staff writer for the Wonderful World of Disney. As VP Creative Director for Paramount Pictures, Nick did experimental work in interactive television and story-based simulations. He is the author of Management by Guilt (Fawcett Books 1984 - a Fortune Book Club selection) as well as eight technical books on simulations and interactive media. He lives in Northern California with his wife, Ginny. For more about Nick, visit www.nickiuppa.com.

You have subscribed to alerts for Nick Iuppa.

You have been added to Nick Iuppa's favorite list.

You can also sign-up to receive email notifications whenever Nick Iuppa releases a new book.