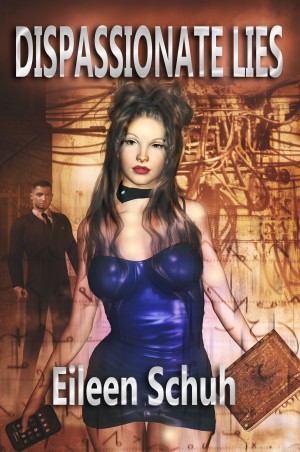 By Eileen Schuh
Rated 4.50/5 based on 2 reviews
The year is 2035 and the world’s emerging from a devastating economic collapse. Computer guru, Ladesque, finds her task of restoring the world’s internet capabilities, dull until...

She’s approached by an attractive FBI agent intent on recruiting her to an ultra-secret project. There’s only one problem—the asexuality she was born with, vanishes and she’s left struggling with her libido. More
The year is 2035 and the world’s emerging from a devastating economic collapse. Computer guru, Ladesque, finds her task of restoring the world’s internet capabilities, dull until...

She’s approached by Paul, an attractive FBI agent intent on recruiting her to an ultra-secret project. There’s only one problem—the asexuality she was born with thirty-five years ago, vanishes and she’s left struggling with the unfamiliar power of libido.

When everyone, from ungainly computer geek, Roach to handsome Paul, becomes appealing, Ladesque suspects the popular explanation for the female asexuality saddling her generation is a lie. Her suspicions increase when an encoded diary and whispered rumours link the affliction to conspiracy and murder. However, uncovering facts proves difficult in an age where hackers have corrupted all digital records.

Putting her quest on hold, she joins Paul’s project where her uncertainties are quickly overshadowed by the explosive technology and high-tech challenges of her job. Then, she receives her final assignment. She can either expose her mind to the potentially lethal quantum computer for the sake of the world or be forever a watched woman.

Dispassionate Lies is a SciFi book by Eileen Schuh that tells of a world that could easily be our future instead of just science fiction. The main character, Ladesque, is a computer programmer given the impossible task of fixing the internet after hackers destroy it. Most of the world has been in a long recession and everyone needs a big win to get back the quality of life they had before.

Meanwhile, Ladesque is asked to join the FBI and become a part of a secret project to create a quantum computer that could provide amazing improvements in just about everything. However, before she does she needs to understand how her parents died and why after living her life as a eunich at 35 years old she suddenly has strong sexual urges that she never had before. What happened in her past and is their a hidden conspiracy?

Disspassionate Lies focuses on the relationship between three people, Ladesque, and two very different men. One is Paul, an attractive FBI agent, who wants her to take a new job working on a quantum computer. The other is a computer geek that she worked with who is a friend that seems to want more of a relationship with her. Do either of the men have what is in the best interest of Ladesque or are they just trying to use her for their own benefit?

Ladesque is one of a large group of female eunichs that since puberty have understood that they are a protected minority. Eunichs are protected from the rest of the population that live in a sexual world that drives many of our daily decisions and relationships. However, Ladesque starts to have thoughts and urges that she never had before. Why is she having these feelings? She learns through her research on the internet that she is attempting to fix that there was a drug company that created birth control pills that affected mothers of the eunichs. Was her mother murdered because of her investigations into this drug company? Did her father also get murdered because of his research into the reasons for her mother's death?

Ladesque is offered an amazing opportunity to work on a quantum computer but it isn't so simple. She will directly interface with the computer and it is uncertain how the computer will react as it learns. Ladesque could become trapped inside the computer and even die. Before she has to make such a life changing decision she gets a few weeks to take care of her personal affairs. She begins to read the reseach that her mother did on human sexuality and believes that the drug company that created the birth control pills her mother took was part of a huge cover-up.

Disspassionate Lies has several components of a romance novel, a genre that I am completely unfamiliar with. What will Ladesque do with these new urges and who will she choose? Can she trust either man and will she uncover the secrets she is looking for.

I liked this book and found the plot to be a very possible in our real world. At 204 pages the book is a quick read and will be enjoyed by those that like their SciFi mixed with some conspiracy and a bit of romance. I rate it 4 out of 5 stars for the unique storyline, good characters, and intelligent writing.

Dispassionate Lies is a sci-fi novel with themes on women' s issue mixed with romance. The year is 2035 and Ladesque lives and works in Boulder, Colorado for Global Construction. She has been working on a security programme to get the internet back up and running.The internet no longer rules the world after hackers and security breakdowns infiltrated its very core and data was no longer safe.

Ladesque has personal issues too. Born in the year 2000 she is the result of a generation of chemical birth-control pills. Diagnosed as Asexual, she's one of 25% of North American females now infertile and lacking libido because of pills their mothers were prescribed. When FBI agent Paul Krimmons approaches Ladesque with a top secret job offer she finds herself attracted to both Paul and the chance to leave Global construction. But she is confused when her body starts to respond sexually to Paul.

Before she commits completely to the new job Ladesque must tie up the loose ends of her own life. She finds that her mother began research into cures for asexuality and finds shocking reports of a drug which could reduce birth rates, stabilise work forces and reduce crime. Digging deeper she uncovers material suggesting both her parents died trying to give their daughter a normal life.

Confused by Paul who swings between support and pressure to commit to the new job, Ladesque turns to fellow worker Roach. He's against her giving up her life for Skinner's Box. It's a new super computer. It will make her a cybernaut and she may no longer exist in human form once she's wired up to the main frame. It's a life changing decision and Ladesque uncovers the lies around her and finally decides who she can trust.

This book should make you question just how safe we are in today's age of technology and think about what we will be passing on to our future generations.