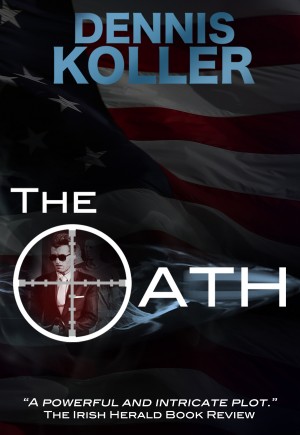 A lifetime ago, a young naval aviator took that Oath. Tom McGuire, now a San Francisco PD Homicide Inspector, hadn’t thought about the Oath in years. That was all about to change.

A famous San Francisco newspaper columnist has been murdered. In her own kitchen. One bullet between the eyes. Her arms had been tied behind her, knotted together from shoulder to wrist.

McGuire feels an eerie chill of recognition. After being shot down over North Vietnam, he suffered seven years as a Prisoner of War in the infamous Hanoi Hilton, enduring rope torture many times -- his arms tied in exactly the same way.

A lifetime ago, another young naval aviator also took that Oath. He also was shot down over North Vietnam, and joined McGuire as a POW in Hanoi. After 30 years, their lives were about to intersect once again. This time with explosive consequences.

"The Oath is one of those books difficult to put down. If you are one of us who did not appreciate Jane Fonda giving aid and comfort to the North Vietnamese during her visit to Hanoi in July 1972, you will appreciate this book. Very entertaining."
RADM Thomas F. Brown III - Naval Aviator and veteran of three deployments to the Gulf of Tonkin in support of the war.

"The characters and dialogue are ultimately believable. The ending is unpredictable in the extreme. Combined, you've got a real page turner."
The Irish Herald Book Review

Dennis Koller is the author of highly acclaimed mystery novels The Oath, The Custer Conspiracy, The Rhythm of Evil, and One Death Too Far. Mr. Koller holds an undergraduate degree in Philosophy and a graduate degree in Business Administration. After having taught for a number of years at the collegiate level, he slid into senior level collegiate administration. In 2013, Mr. Koller left it all behind to pursue his passion for writing. Between then and now, he finished the three above named novels. He is published by Pen Books and lives in the Dallas area with his wife.

Reviews of The Oath by Dennis Koller

A gripping story.
The Oath is a well written story which revolves around a returned soldier who endured, when held a prisoner in Vietnam, systematic abuse at the hands of his captors. Thirty years later, he is hell bent on revenge and seeks out those do-gooders back home whom he feels were the direct cause of his terrible degradation. Do-gooders incited, with their words, his captors to dole out punishment in the most horrifying way.

Tom McGuire with his partner Mike Irvine, of the SFPD, are given the task of tracking down the killer. At the crime scene of a latest horrific murder, Tom realizes that this is no ordinary killer but someone who knows what it was like to be tortured as a prisoner of war in Vietnam as he himself was.

When it becomes evident that killer's next mark is the Governor of California, Tom knows that he must find the perpetrator fast.

Dennis Koller is a master at weaving a great story and memorable characters and it’s not often that I come across such a skilled author. I’ll definitely be looking out for his next book.

You have subscribed to alerts for Dennis Koller.

You have been added to Dennis Koller's favorite list.

You can also sign-up to receive email notifications whenever Dennis Koller releases a new book.