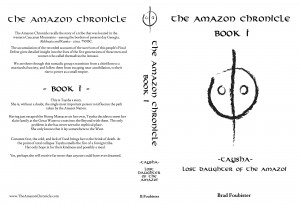 The Amazon Chronicle Book I -Taysha - Lost Daughter of the Amazoi

- Book I is where it all begins with a small young woman of only 14 Winters. Taysha escapes the Hoorg Massacre alone and becomes the single most important person in the destiny of the Amazoi people. More
- The Amazon Chronicle follows one ancient tribe from their transformation from a chiefdom to a matriarchal society. The tale starts at their near annihilation and continues to see their rise as a small empire in the Caucasus region.

- Book I is where it all begins with a small young woman of only 14 Winters. Taysha escapes the Hoorg Massacre alone and becomes the single most important person in the destiny of the Amazoi people.

-The E-BOOK is FREE in its entirety. No catches.

The historic-fiction behind the myths of the Amazon Woman warrior.

A seven novel series that follows the Ama-zoi as they change from a patriarchal society to a matriarchal rule and eventually becomes the basis of the myths of the Amazons first mentioned as defenders of Troy in The Illiad.

Book I:
Focuses on Taysha, the single-most important person in the future influences of the Amazoi people. It is her escape from the massacre by the Hoorg tribe that enables her to find the teachings of the martial arts. With her new ability to match men in battle, she is able to raise up a new generation of Amazoi to set the scene of their rise as a small nation.

Book II (Part I & II):
Sees Taysha's direct influence as the members of her tribe find their places in the new order. Their numbers grow as new generation is born, and new peoples are accepted. We are there as the children mature and the Amazoi carve out their own land by their blood.

Book III (Part I & II):
With the new generation of Amazoi and freed slaves grow into adults and start taking the positions held by their parents, tensions build regarding the position of chieftess. Some would argue it better a position for a man. Yet the newest chieftess defies all by rapidly creating a small empire in one season.

Book IV (Part I & II):
With the Amazoi Empire expanding all too rapidly, the inevitable backlash of surrounding enemies and unstable allies occurs. The Amazoi leaders are forced to juggle diplomacy while finding out which tribes that surround them are still loyal.

You have subscribed to alerts for Brad Foubister.

You have been added to Brad Foubister's favorite list.

You can also sign-up to receive email notifications whenever Brad Foubister releases a new book.