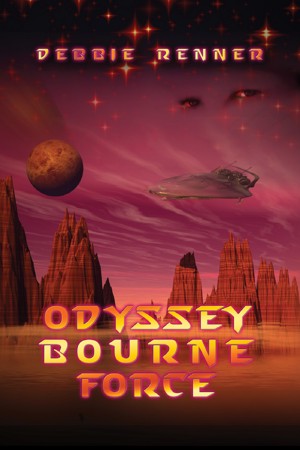 Odyssey Bourne Force - Experience the Journey, the Destination is only the Beginning (Book 1)

By Debbie Renner
Rated 5.00/5 based on 1 reviews
Odyssey Bourne Force is a top-secret project run by a covert organization possessing mankind's most formidable discovery: an indestructible monolithic stone door uncovered during an excavation in Egypt. Realizing the consequences of its astonishing properties, O.B.F. must now race against time to save Earth from forces that threaten to alter the fabric of life itself. Book 1 of a series. More
Forty year old reclusive KATE WILLARD is struck down with unexplainable nightmares of violence and brutality. Desperate for answers, Kate sets out on a spiraling adventure, beginning at an out of town shopping mall where she is drawn inside a quaint, mystical shop. She discovers a bloodstone, and upon contact, it crudely unlocks powers within her that she has trouble controlling. Her subsequent dreams uncover Divisions; a covert, civilian organization running a top secret project known as the Odyssey Bourne Force - so secretive they deny their very existence. Divisions has been guarding and utilizing an ancient stone door, allowing these 'non-existent' heroes access to explore and build up alliances with worlds beyond our own.

After a rocky beginning, Kate joins Divisions, and falls in love with OBF team member DOCTOR PETER REYNOLDS, a brilliant archaeologist who excavated the stone door in Egypt. Amongst his vast collection of artifacts, he possesses a second, identical bloodstone. Together, they learn she is the reincarnation of an ancient Queen who miraculously stopped an evil force from wiping out humanity six thousand years ago. According to one of Kate’s harrowing visions, this was accomplished at a tragic price. However, the reincarnation process was imperfect - leaving Kate with disjointed memories that hide the vital truth.

Meanwhile, Kate’s connection with the stones has alerted KALVICH, ex-god and Supreme Ruler of the Trimadian hybrid race to assign a mission to his most trusted friend and second in command, the nefarious LORD TALOKTA. He must deliver, at all costs, this valuable cargo, including the bloodstones to Heliostronus, the Trimadian home planet. An enigmatic ceremony has been planned, and Kalvich will do anything to possess Kate and her unique powers.
During Kate’s first off world mission to help the indigenous Cantal people’s rebellion on the planet Ahmadeus, she and her team are kidnapped by Talokta’s fleet. Not only is Kate contending with an internal identity crisis, but unknown to her, a devious blend of techno-sorcery and subliminal manipulation is seducing her mind. As Kate’s team mates are facing death, or worse - enslavement inside the dreaded Mines of Heliostronus, an innocent Kate is hot in the spotlight and all is reliant on her - but who can Kate rely on, if not herself? Even with aid from a seemingly nice pair of elderly rebel gods - who breach the number one rule of non-interference - it could already be too late. Desperate to warn Earth - the team, with a sedated Kate, plunge into a daring escape, but at the last moment, are caught. The shocking conclusion has the OBF team facing alien mind-altering experimentation, humanity facing a new world order, and Kate led towards a dangerously, unpredictable future where she holds the destiny to life itself. Is it the end...or just the beginning.

My love of science fiction developed at an early age thanks to popular TV series such as Star Trek, Space 1999 and Lost in Space, plus books like The Day the Earth Stood Still, The Phantom Tollbooth and Alice in Wonderland. Drawn to action series like '24' and the hugely popular Star Gate SGC. "Independence Day'' is one of my favorite flicks because of its blending of strong characters, brilliant script, humor & ACTION! Another that comes to mind is "Evolution" starring David Duchovny.
I remember the days when there was no restrictions and my dad took me to see 2001: A Space Odyssey when I was 6 years old. I was absolutely terrified. I remember the muster smell in the theatre in Wellington and had nightmares for weeks after. That experience had a definite impact on my brain today. If I can get scared, I want to relate that to others, badly.

I am a late bloomer as I never really thought about writing, but when I moved to Australia, lightening struck one humid evening in 2005. Odyssey Bourne Force began life as a two page hand scribbled essay, and then decided to grow arms, legs and a personality in the process. And that process is still developing. Where it stops nobody knows.

I have scores of unfinished manuscripts of novels, short stories, poems and lyrics stashed away in cyberspace, ready to one day face a brave new world.

My second book in the OBF series "The Sword of Sorrows" continues right after the first one and offers plenty of twists, turns and 'what if' to keep the reader guessing to the end. Which I promise will either piss you off or/and tear up your brain into confetti. My third book will bring you full circle and beyond: "The Katophia Mission." As from the 7 July 2018, The Katophia Mission has been completed. Yay!

Both OBF & SOS (Book 1 & 2 respectively) have been cleanly re-formatted and you are welcome to upload these for free if you have previously uploaded older versions:) Please read all three books respectively.

My short story "Bad-Habits" was short listed in the Brighton Community of Writers competition. It is a dark, humourous tale about some quirky characters with psychological problems tied together with a "Tales of the Unexpected' ending. Read that for a bit of light relief.

Though OBF is my first (physical) published novel, already a feature film script has been written by the multi-talented Deborah Louise Robinson and is up for option.

All questions and feedback is most welcome at: obf1@bigpond.com

Remember, the third book in the series, "The Katophia Mission" is ready for sampling and downloading.

Odyssey Bourne Force
This is a book trailer for OBF and is not affiliated with the screenplay.

What a wonderful book!. The first sci fi book I read so many years ago was 'Space, Time, Task, Force' which was written in the fifties sometime. My first sci fi movie then was 'The Day the Earth Stood Still' with Michael Rennie. Have been a lover of science fiction ever since with my favourites 'The War of the Worlds' [both versions] and many other books and movies as well. OBF to me is another classic in that line. So well thought out and written. Deep in story that really involves you with each chapter read. Do most of my reading late at night in bed with a cat on my lap. with the story fresh in my mind, when I go to sleep I dream of soaring through light years in space with my cat by my side. ha ha Truly recommend Debbie Renner as an author. Looking forward to reading the second in the series which I have bought and the third when it becomes available. :) Thanks Debbie Renner.

You have subscribed to alerts for Debbie Renner.

You have been added to Debbie Renner's favorite list.

You can also sign-up to receive email notifications whenever Debbie Renner releases a new book.