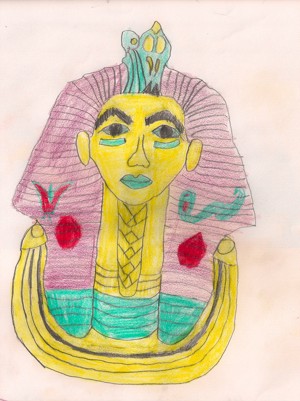 The Resurrection Of King Tutankhamun

By David Morvolo
Susana a young Archeologist, stumbled on ancient historical artifacts during her school field trip. She used an amulet given by her father to accidently resurrect King Tut from his eternal slumber. King Tut tells her about his unfinished business and he wants Susana to help him. Susana's father who is an Archeologist currently working in Egypt helps the royals solve an ancient mystery.

All of author's proceeds will be donated to Egyptian Museum of San Jose.

My name is David and i wrote the book Ressuruction of KIng Tut. My second book is also coming out soon and will be sold at $2 and it will be longer and a much more exciting book. This one will have more adventure. King Tut will be mentioned briefy but Susana is still there. here is a brief summary. So Susana heres a story about Plato about the greek gods and talks about Atlatnis here is the first chapter:The night was warm and misty, Susana stay awake on her bed reading her book report book that was due tomorrow. When she finished the book she put the book on her bedside table and was fast a sleep before you knew it. She was tired of the long hours of soccer practice and basketball and drama class and was glad to have finished her book report.

She had a very strange dream that night. Plato the grand teacher of Alexander the great told Susana a story. “Susana this is the story of the Greek gods. Their father was Kronos who was the ruler of the cosmos at the moment was the king of the titans. A prophecy had been stated that one of the sons of Kronos would over power him and send him to Tarturus. (Susana new this because her book report book had stated these facts). Kronos had four children. Once three of the children were born Zeus’s mother could not bear him be eaten and so gave kronos a rock instead. Kronos was illing and so could not see properly and Zeus’s mother new that so she gave him a big rock. Kronos ate the rock thinking it was his fourth child. 15 years later Zeus went to his father and made him puke all the other three children. Then with his fathers on scythe Zeus cut kronos into pieces. Zeus then went into his father’s position and became the king of the gods.

That brings our story to Poseidon. Poseidon became the ruler of the ocean and because earth is the only planet with ocean. Their he created land so that inhabitants could grow. One of the places he created was called Atlantis. Atlas had beautiful woman and men and children. Of these fine woman there was a woman named Ryes. Of all the other people he made this one he made as best as possible. Once he created Rye he asked her to marry him she willingly said yes. Poseidon was so happy that he gave her one of his most prized positions a pearl that would grant every wish. Rye had many children, their names Asia, Africa, North America, South America, Antarctica, Europe and the favorite of Poseidon and Rye was Atlas. All of the children were then given there on place o rule and Atlas was given the best place, Atlantis. All Poseidon’s kids were fighting over their lands. All of them wished they could have Atlantis. They were upset that of all of the kids they picked the most youngest and most childish of them all. Soon there was a world war thousands of Poseidon’s most beautiful creations were totally destroyed. When Poseidon felt the presence of so may dead people in the ocean he got very angry, so angry that literally all the continents separated. So angry he used a whirlpool and sucked in all of Atlantis, and then Rye remembered her gift and bit the pearl and wished an air bubble covered Atlantis. As Atlantis suck down under the water, an air bubble formed and Atlantis went underneath the ocean. After that Atlantis was underwater and has been gone ever since, but soon that will all change.

With that last word Susana woke up. Susana had wanted to ask so many questions. She new it was just a dream but those last words still bothered her. Was it true that someone will find Atlantis soon?
Cant wait for the book

You have subscribed to alerts for David Morvolo.

You have been added to David Morvolo's favorite list.

You can also sign-up to receive email notifications whenever David Morvolo releases a new book.