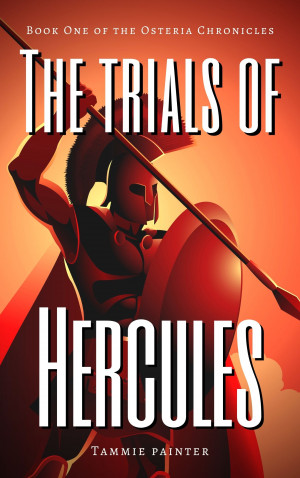 The Trials of Hercules: Book One of The Osteria Chronicles

By Tammie Painter
Myths and heroes may be reborn, but the whims of the gods never change.

Perfect for fans of Clash of the Titans, as well as historical fantasy fiction by Madeline Miller, Mary Renault, Glyn Iliffe, and S.J.A. Turney, comes this highly recommended tale of love, jealousy, honor, and betrayal. More
A devoted father and celebrated hero.
A crime that puts him at the mercy of a corrupt leader and a vengeful goddess.
A classic myth brought to life as you’ve never seen it before.

Perfect for fans of Clash of the Titans, as well as historical fantasy fiction by Madeline Miller, Mary Renault, Glyn Iliffe, and S.J.A. Turney, comes this highly recommended tale of love, jealousy, honor, and betrayal.

Convicted of three heinous murders, Herc Dion is sentenced to a series of trials that will pit him against formidable monsters, push his physical and mental endurance to the limit, and deliver him to the edge of Hades.

In the midst of these ordeals, Herc finds himself the object of a priestess's love - a love that if acted on could mean both their deaths. Herc also unknowingly endures the brutal cruelty of the goddess Hera whose obsessive hatred of Herc has blinded her to the near ruin of her realm and to plans that will spell the end of her existence.

Realizing Hera’s whims have ruined his life, will Herc face death itself to protect her, or will he turn his back on the gods, his home, and his love to forge his own kingdom?

The Trials of Hercules is the first installment in the Osteria Chronicles, a captivating series in which the myths of Ancient Greece come to life as you’ve never seen them before.

What Readers Are Saying...
"This book was a pleasant surprise!  I was immediately pulled in within the first few pages."
"I think this book should be rated as one of the top ten books of the year. I can't emphasize enough how good this book was and how much I enjoyed reading it."
"For anyone who enjoys fantasy or history this is a book for you! An outstanding book! Very well written, engaging and truly a fun and enjoyable book to read."
"This book has many human ideals like heroism, corruption, love, and vindictiveness. I recommend everyone to read this."
"...this book kept me turning pages the whole way through like any guilty pleasure."
Download: epub mobi (Kindle)
Price: Free! USD
Add to Library
Create Widget
Tags: epic fantasy fantasy series greek mythology historical fantasy greek god pacific northwest hercules gods and men mythology gods greek hero
About Tammie Painter

First up, be sure to pop by TammiePainter.com to get your exclusive (and FREE) copy of "Mrs. Morris Meets Death," a humorous tale of mortality, time management, cruise ships, and... um, romance novels.

Many moons ago I was a scientist in a neuroscience lab where I got to play with brains and illegal drugs.

Now, I’m an award-winning indie author who turns wickedly strong tea into imaginative fiction (so, basically still playing with brains and drugs) that's often set in an altered version of my hometown -- Portland, Oregon -- or the Pacific Northwest.

My fascination for myths, history, and how they interweave inspired my two historical fantasy series, The Osteria Chronicles and my second series, Domna.

But all those ancient myths and angst-ridden heroes got a bit too serious for someone with a strange sense of humor and odd way of looking at the world.

So, while sitting at my grandmother’s funeral, my brain came up with an idea for a contemporary fantasy trilogy that’s filled with magic, mystery, snarky humor, and the dead who just won’t stay dead. That idea turned into The Cassie Black Trilogy, which has turned into a fan favorite.

I'm currently working on a new series where dragons do the sleuthing when people start getting bumped off at a very unusual circus.

When I’m not creating worlds or killing off characters, I can be found gardening, dreaming of my next travel adventure, working as an unpaid servant to four cats and two guinea pigs, or concocting something in the kitchen.

Before you wander off, be sure to grab my FREE series starters, The Trials of Hercules: Book One of the Osteria Chronicles; and Domna, Part One: The Sun God's Daughter.

About the Series: The Osteria Chronicles

The Osteria Chronicles are a multi-part fantasy series. Set in a future world that resembles the city-states of Ancient Greece, you’ll see myths come to life as the heroes of Osteria contend with the whims of the gods.

Hundreds of years ago, North America experienced The Disaster. In what was once the Northwest, the survivors built a new world, Osteria, which was then divided into twelve city-states.

To this world came the gods formerly worshipped by the Ancient Greeks. The gods have not changed—they are still powerful, petty, and consumed with rivalries and jealousy.

And as before, the gods do not play fairly with those they despise.

Also in Series: The Osteria Chronicles

Reviews of The Trials of Hercules: Book One of The Osteria Chronicles by Tammie Painter

You have subscribed to alerts for Tammie Painter.

You have been added to Tammie Painter's favorite list.

You can also sign-up to receive email notifications whenever Tammie Painter releases a new book.