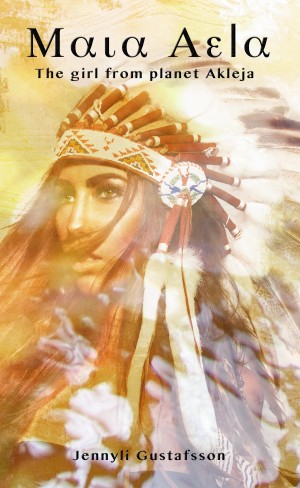 By Jennyli Gustafsson
This is the story of a changing world; the search for a soulmate and the mediating of important messages to mankind. Central to the story is Maia Aela, a young girl and the light inside her soul penetrates the veils of illusion here on Earth. More
Mother Earth is about to go through a crucial transformation that will take mankind to the next level of spiritual evolution. This is the story of the search for the twin soul and the inner kingdom of God. You get to meet the young girl from Sweden, Maia Aela, who spent her previous life on planet Akleja in the Pleiades. You also get to meet Ernesto, who comes from Peru and whose ancestors were Inca Indians.

Maia’s encounters with the ancestors from the Pleiades take place through a portal of dimensions. Their many talks develop and create a vital image of the new human race that is about to be born. Ernesto also carries ancient wisdom from his forefathers via his grandmother. In a magical way this wisdom gets intertwined with the messages from planet Akleja. Maybe it is not a coincidence that Maia and Ernesto bump into one another. It might have been decided long before they were born in accordance with ancient Inca prophecies. The girl from the Scandinavia and the boy from Latin America have a joint mission; to unite north with south, modern with ancient and woman with man.

Just like Mother Earth is seeking her twin soul to unite with, Maia is seeking hers. The air of mystery thickens with the many messages, symbols and incidents in Maia’s life. As the reader you can apply the essence of this to your life and in that way help Mother Earth to be blessed with a timeless soul mate. This idea helps her rise into a state of vibration and will free her from all suffering. The book welcomes you to take part in a breathtaking journey through your inner universe, where you at the same time will be given the opportunity of looking outwards to unfamiliar galaxies.

I was born in 1973 in the Swedish countryside, close to animals and nature. Very early on in my life, I was introduced to the creative world when I as an eight year old girl started playing the violin. My interest in writing has blossomed in recent years, when I discovered that a text can also vibrate as tones and in its own way reach all the way into someone’s heart. My strong desire to understand the meaning and innermost essence of life led me to the ancient wisdom of the Inca Indians about how we humans can interact with the living energies of nature and this opened me up to the creative vibrations of eternity, which suddenly started flowing through me towards the end of 2006. I have later understood that the inspiration and the messages are coming from the Pleiades.

The first book ”God has a plan” was published in 2007 and since then there’s been a book published every other year. “Messenger to Earth” came out in 2009 and “The Earth we inherited” in 2011. During that year, I also assembled this trilogy into one book and called it “The Book of Eternities”. In 2013 the next book “Maia Aela – the girl from planet Akleja” was published, which in character is a bit different from the other books. I have written this book as more of a novel and I weave the spiritual messages from the Pleiades into a fictitious story about Maia from Sweden. In this book, Maia makes contact with her dead sister, who has been reborn in the same galaxy that Maia comes from. She also meets a man from Peru, who is a direct descendant from the Inca Indians and he treasures their wisdom and cultural heritage. Their lives intertwine and together they highlight and emphasize the fundamental principles of both human and divine life. The story about Maia Aela doesn’t end with the first book. There’s more to come – watch this space!

You have subscribed to alerts for Jennyli Gustafsson.

You have been added to Jennyli Gustafsson's favorite list.

You can also sign-up to receive email notifications whenever Jennyli Gustafsson releases a new book.