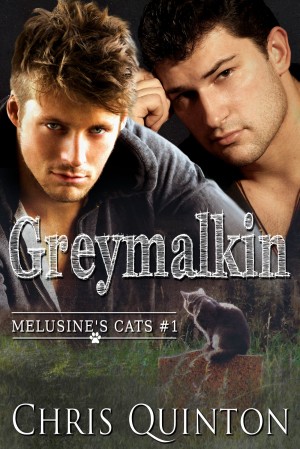 Jesse Adams is an ex-rugby player who's gone into seclusion to avoid the media following a guilty verdict in a court case. Jesse has come to live for a year in Greenlynn, where he is supposed to be writing his biography.

Will Blake is an out and proud policeman, respected and liked by the community he helps to protect from rural crime.

When the two men meet their attraction is instant, but they have no idea their love will draw them into a centuries' old conflict.

Melusine, a deity of rivers and seas, long ago lost the Battle of the Betrayal and is imprisoned in a nexus centred on the source of the Lynn River. She can only travel in the flowing water of her river, and cannot set foot on her banks. Her cats are not so bound. Neither pets nor familiars, they move freely between the realities, her agents among the humans who live along the Lynn.

When Melusine's enemies come to the valley in search of revenge, Jesse and Will discover they have a part to play in the ancient feud. Do they commit to becoming part of a mythical triad, or leave the valley and forget they ever knew that magic exists?
Available ebook formats: epub mobi pdf rtf lrf pdb txt html
First 20% Sample: epub mobi (Kindle) lrf more Online Reader
pdb
Price: $2.99 USD
Buy Add to Library Give as a Gift
How gifting works
Create Widget
Tags: gay contemporary paranormal
About Chris Quinton

Reviews of Greymalkin by Chris Quinton

You have subscribed to alerts for Chris Quinton.