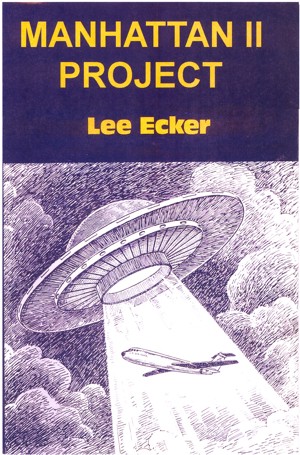 By Lee Ecker
A realistic science fiction novel, packed with suspense, action, intrigue, and a wonderful love story. Air Force Major Brad Anderson, along with seven crew members, is flying a seriously injured Air Force dependent to Walter Reed Hospital in Washington, D.C., when he encounters a UFO of enormous size that draws his aircraft inside and the adventure begins with a challenge from the future.

I grew up on small farm in Northern Michigan dreaming of becoming a pilot while watching aircraft far overhead. I achieved my dream by attended Michigan State University and obtaining a commission as a Second Lieutenant through the Air Force ROTC program. I'm a Vietnam veteran and was awarded the Distinguished Flying Cross while flying short field supply missions in the C-7 Caribou in support of the Army. In the Air Force, I flew the C-141, the T29/C131, the C-7, and the C9. Most of my time was in the C9 flying air evac missions throughout the United States and Europe.
In 1975, I earned a master’s degree in counseling from Southern Illinois University. I retired from the Air Force in 1985, after a twenty year career. I began a new career with the airlines hired by Pacific Southwest Airlines and flew 17 years before retiring as an Airbus 319/320/321 Captain from US Airways in 2002. While with the airlines, I flew the DC9, MD80, Boeing 727, Boeing 757/767, Fokker 100, and the Airbus 319/320/321.
I have logged over 18,000 hours in a variety of aircraft flying missions around the world. Currently I am serving as pastor of a small Community of Christ church in Boyne City, Michigan. I have a wife, Sandi, and three children, Jerry, Jon and Corey and several grandchildren.

You have subscribed to alerts for Lee Ecker.

You have been added to Lee Ecker's favorite list.

You can also sign-up to receive email notifications whenever Lee Ecker releases a new book.