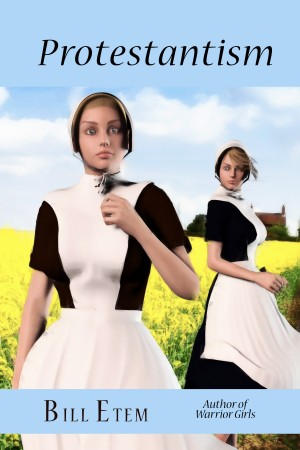 By Bill Etem
The Christian scriptures are clear there is a True Church. There's Matthew 16. 13-19. Ephesians 4. 4: St. Paul's terminology 'there is one body' means there is one True Church. Revelation 20.12-15 says if your name is not written in the Book of Life you get tossed into a lake of fire at the Last Judgment. If your name is written in the Book of Life you're in the True Church & u go to heaven. More
The Roman Catholic Church is either God's True Church, Matthew 16. 13-19, the Church which leads people to heaven, or else Rome is a false church, and false churches lead people to perdition.

So, if Rome is God's True Church, if Rome leads people to heaven, then Rome is the only government we need. It's insane to be governed by these legislative, executive and judicial branches. These secular authorities don't lead anyone to heaven! But they lead people straight to eternal perdition every time they rebel against God's True Church.

Of course if Rome is a false church, if Rome leads people to perdition, then reject Rome.

Rome says Mary is sinless, says she was conceived free of Original Sin, and says she never once committed any sin. The Bible says only God is perfect. Rome says it is a terrible sin to say Mary was not ever-Virgin. The Bible says Jesus had brothers and sisters. And there's Matthew 1. 25. The Dogma of Papal Infallibility says you are anathema (damned) if you reject that Dogma. Well, if Rome is God's True Church then it makes perfect sense that you're damned if you rebel against God's True Church by rejecting one of her dogmas. On the other hand, if Rome is a false church, if Rome leads people to perdition...

“For I will take you from the nations, gather you from all the lands and bring you into your own land. Then I will sprinkle clean water on you, and you will be clean; I will cleanse you from all your filthiness and from all your idols. Moreover, I will give you a new heart and put a new spirit within you; and I will remove the heart of stone from your flesh and give you a heart of flesh. I will put My Spirit within you and cause you to walk in My statutes, and you will be careful to observe My ordinances. You will live in the land that I gave to your forefathers; so you will be My people, and I will be your God."

Ezekiel 36. 24-28 supports Zionism - Zionism being the doctrine that the Jews have a right to live in peace in their own nation in the Holy Land. Christianity says Ezekiel 36. 24-28 doesn't refer to the Zionism at the time of the return of the Jews to the Holy Land following the Babylonian Captivity, because Ezekiel 36. 24-28 refers to a time when the Spirit of God is put into the Jews, and then the Jews never again rebel against God. Christians insist the Jews have been in rebellion against God both before and after they rejected Jesus all those many centuries ago. Bible-based Christians say the Spirit of God is put into a person when he reads and obeys the New Testament. We're waiting for the Jews to convert to Christianity, waiting for them to profess scriptures such as John 1. 1-14, Colossians 2. 8-10, 1 Timothy 3. 16, Matthew 1. 23 etc.

Since the 1st part of Ezekiel 36. 24-28 has been fulfilled, the part about God gathering the Jews into the Holy Land, then the 2nd part, the part about the Spirit of God being put into the Jews, will soon be fulfilled.
Download: epub mobi (Kindle) pdf more Online Reader
lrf pdb txt
Price: Free! USD
Add to Library
Create Widget
Tags: heaven hell
About Bill Etem

`Constitutional History of the Western World' has over half a million words so I wrote some abridgments of it, such as 'Rock Island', 'Guilty Pleasures', 'The Cult', 'Protestantism' etc. The long pitch for 'Rock Island' is a little aggressive. But there's really no excuse for drawing insane conclusions from your premises, no excuse for drawing conclusions which cannot possibly follow from whatever premises it is that you start off with.

In most of my nonfiction books I focus lots of attention on an issue involving the cross and the crucifix. Don't commit sacrilege with either the cross or the crucifix! Sacrilege is a mortal sin which leads offenders straight to perdition. Declaring something to be evil when God says it is sacred, or declaring something to be sacred when God says it is evil are examples of sacrilege.