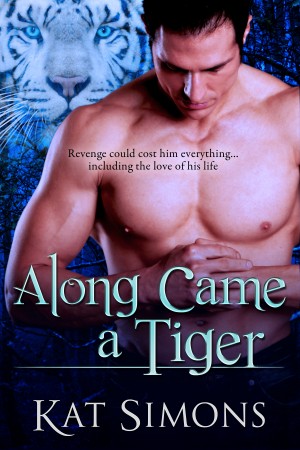 Along Came a Tiger

Sarah Chu’s soul cries out for revenge against the man who murdered her best friend. Daniel Borowski is intent on stopping the woman he loves from breaking a fundamental tiger shifter law—don’t kill humans. But when the murderer comes after them, they’ll have to choose…destroy the killer or protect their own future. Because they can’t have both. More
Never kill a human.

Daniel Borowski, Tracker and enforcer of tiger shifter law, faces an impossible choice when the woman he loves is set on breaking one of their people’s most fundamental rules—don’t kill humans. Daniel’s own sense of justice cries out for the life of the man who murdered one of their own, but killing him—especially in tiger form—is an automatic death sentence. Daniel loves Sarah too much to allow her to throw her life away for revenge. But preventing her from killing could cost him any chance at a future with her.

Sarah Chu never imagined losing her best friend so young and in such a gruesome way. Until then, she was focused on her career as a genetics researcher and trying to get pregnant during the Mate Run so she could be with the man she loves. After her friend’s murder, Sarah can think of little beyond ripping the man responsible to pieces. So when Daniel stops her from taking her revenge, anger and frustration make her lash out at him even as the chemistry between them roars through her. If she kills the human, she’ll sacrifice the life she imagined with Daniel. If she lets the human go, she’s not sure she’ll be able to live with herself.

Justice will come at a price.

To protect Sarah, Daniel will do whatever it takes, including finding another way to get justice. Even that might not be enough for her, though. But when the murderer comes after them, intent on torture and death, Daniel and Sarah will have to choose…destroy the killer or protect their own future. Because they can’t have both.

Kat Simons earned her Ph.D in animal behavior, working with animals as diverse as dolphins and deer. She brought her experience and knowledge of biology to her paranormal romance fiction, where she delights in taking nature and turning it on its ear. After traveling the world, she now lives in New York City with her family. Kat is a stay-at-home mom and a full time writer.

Reviews of Along Came a Tiger by Kat Simons

You have subscribed to alerts for Kat Simons.

You have been added to Kat Simons's favorite list.

You can also sign-up to receive email notifications whenever Kat Simons releases a new book.