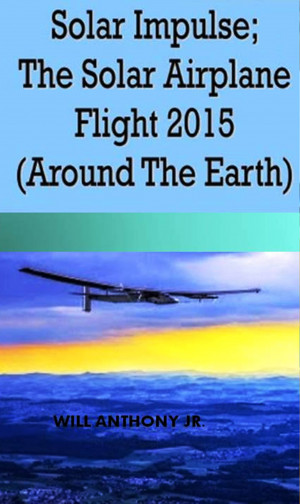 Solar Impulse; The Solar Airplane Flight 2015 (Around The Earth)

By Will Anthony, Jr
For those who love this space ship called Earth, the journey that Solar Impulse will be making across the world skies in 2015 will also be a journey for them. As Solar Impulse will be crawling through the sky at near 70 KPH in March 2015, the perception that we hold concerning our economy and ecology must change. More
I am not certain if in 1999, when Bertrand circled the earth in a balloon, he was setting stage for the Solar Impulse feat or simply it was his Impulse to go Solar! What might have happened in that travel to make him think of a fuel-less flight machine? Whatever the case, it is a project worth emulating! He says, “The pioneer is not always the one who succeeds, but rather the one who is not scared of failing.” I believe in his words. We are here today because of daring men and women, people who went forth to do what they believed in. The common thing about our pioneers is that they go forth to achieve feats for the good of others. The greatest benefits for their pioneering works have gone to others more than themselves. We cannot therefore pretend that the pioneers are the sole beneficiaries of their efforts, we all desire good lives but we all don’t have the ability or the know how to change for the better! In 2015, Solar Impulse will be crawling through space at may be 70 KPH. Perhaps in 2,060 AD, there will be a solar plane that will be hurtling through space at supersonic speed. Perhaps in 2,200 AD, there will be solar planes that carry over 300 passengers. Perhaps in 2,300 AD there will be a human colony in Mars and shuttles can be made to Mars and back on solar powered space vehicles. True, we are not there yet, but I believe that discoveries in physics, chemistry and mathematics are not yet entirely exhausted. We must remember that there was a time in history that it was impossible to claim that the world went round the sun. You would be considered a heretic then if you dared to say that the world was flat, not round.
Available ebook formats: epub mobi pdf rtf lrf pdb txt html
First 20% Sample: epub mobi (Kindle) lrf more Online Reader
pdb
Price: $1.50 USD
Buy Add to Library Give as a Gift
How gifting works
Create Widget
Tags: alternative energy aviation technology solar energy solar power renewable energy sustainable technology aircrafts solar impulse technology and environment
About Will Anthony, Jr

Will Anthony Jr. is currently the Chairman of the Uasin Gishu County Land Control Board which caters for over one million people. Before this stint, he worked in other capacities with the National government. He has also been lecturer in three religious institutions, a service to the youth to gather knowledge from the aging population. In his life time, Will Anthony Jr. says he has met a lot of people and can unflinchingly say that he loved most of them. Why most of them? Well, it is a tall order to love everyone you meet! Will Anthony Jr. has written several e-books touching on diverse subjects that relate to society. The books extensively cover human social and economic practices and this is so because expertise in one field in Africa can become a drudgery according to his practical view. His perception is that if you were born in Africa and the continent is your aboriginal home, you are likely to have English as your second language (ESL). Sometimes it could even be a third language. For him, he had to learn his mother tongue then learn both English and Swahili simultaneously. He went to his pre-primary bare foot, later he joined the local primary school 5 Km away and had to trek barefoot again not because his parents could not buy him shoes but because cobblers were a rare find. That journey was a daily toil of 10 Km, 5 days in a week or ~270 days yearly for 7 years. With a smirk he says that when you achieve a PhD in Africa, then You have done Plenty of hard Digging (PhD) or you have a Permanent head Damage (PhD) and you might end up in a ditch because your IQ cannot contain the booze like the local fellas!
"Why did the English colonize Africa?" To keep the African languages in Czech (check), and he says that one must forgive this pun. But besides the pun, English has broken both social and economic barriers of the once "dark continent" whose forefathers slaved the white farms and firms to lace the pockets of their Lords.
A PhD holder in Africa will still practice other 'trades' though they maybe 'very' learned because poverty is shameless, one has to draw bounds through plenty of smart work or else, it will be a shame to steal so as to maintain class.
He published a book in 1992, but the publisher coned him , he took her to court and the case aged in judicial corridors for 12 years. He then made a decision to abandon the matter and to forget about writing books. However, Self publishing made him to change that decision. More than anything, He salutes Smashwords Inc. for the platform.
In retrospect, He recalls a Dr. Alfred Sam, a friend of his from North America who was also a dean of studies in a local university, exposing his white ass in the university's auditorium to catch attention. The noise ceased as students and lecturers turned to look at the grown-up man on the podium doing the abominable. Well, the good Dr. in anthropology then simply pulled up his trousers buckled the belt and said, "Thank You, now I have your attention..."
For the sake of simplicity, without much display of academia, Will Anthony Jr. is a writer in the global village market . For this, he Salutes all his readers and all lovers of written work. In a word of caution, he says that men and women alike must bear. In reference, there is an Ibo saying that every market place has it's mad people who will attempt to mar the business of the seemingly sane people. On the other hand, the English say everyone is mad, it's only the degree madness that is at variance. Salutes most profoundly!

You have subscribed to alerts for Will Anthony, Jr.

You have been added to Will Anthony, Jr's favorite list.

You can also sign-up to receive email notifications whenever Will Anthony, Jr releases a new book.