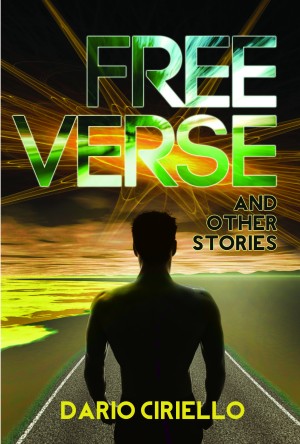 Free Verse and Other Stories

FREE VERSE: When whole bundles of worldlines—parallel realities—begin to collapse and die, an old linewalker is the only one who can help—if he can conquer his own demons.
COLLATERAL DAMAGE:An artist working on a docked luxury star-yacht is taken captive when the ship is hijacked by pirates, and has only hours to save himself before losing everything to the inflexible laws of spacetime.
TIGGER WALKS THE PLANCK: An AI trapped in a cloned feline body finds itself the unfortunate subject of an all-too-real Shrödinger's Cat experiment.
DWELL ON HER GRACIOUSNESS: At the edge of the universe in a tiny, experimental ship, a priestess from the Far Sisters cult sent to observe an impossible phenomenon faces madness and terror.
SKIFFY SUPRÈME: So just how DO you bake a planet?
DANCING BY NUMBERS: Lyra discovers an ability that can change worlds—and then makes a terrifying choice that will change them further still.

Like most writers, Dario Ciriello has lived several lives in one and enjoyed an eccentric career trajectory. He’s worked in a warehouse, driven trucks, drag raced motorcycles, had a small import business, and enjoyed a twenty-five year career as a decorative painter.

Today, Dario is a professional author and freelance editor, as well as the founder of Panverse Publishing.

His first novel, "Sutherland's Rules", a crime caper/thriller with a shimmer of the fantastic, was published in 2013. "Free Verse and Other Stories", a collection of Dario's short Science Fiction work, was released in June 2014. His new novel, a supernatural suspense thriller titled "Black Easter", will be released on December 5, 2015.

Dario has also edited and copyedited over a dozen novels, as well as three critically-acclaimed SF novella anthologies "(Panverse One", "Panverse Two", and "Panverse Three").

Dario's nonfiction book, "Aegean Dream", the bittersweet memoir of a year spent on the small Greek island of Skópelos (the real "Mamma Mia!" island), was a UK travel bestseller in 2012 and has recently been published in Poland.

He lives with his wife in the Los Angeles Area.

You have subscribed to alerts for Dario Ciriello.

You have been added to Dario Ciriello's favorite list.

You can also sign-up to receive email notifications whenever Dario Ciriello releases a new book.