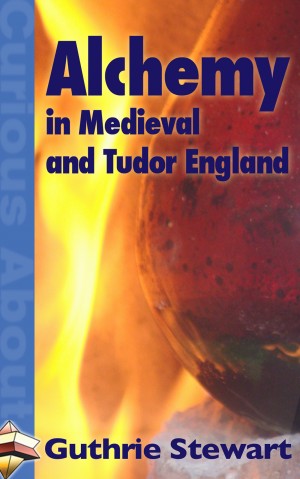 Alchemy in Medieval and Tudor England

By Guthrie Stewart
This book guides you through the arrival and growth of alchemy in England in the medieval and Tudor periods. More
Alchemy – a subject of much speculation and a lot of confusion. Is it all about turning lead into gold, or is it more than that?

This book guides you through the arrival and growth of alchemy in England in the medieval and Tudor periods.

On the way we meet famous people like Roger Bacon and John Dee; ordinary scoundrels and of course Kings and a Queen. The actual purposes of the alchemists, who were not just interested in gold and silver, are explained, and some of their practical works made clear.

Guthrie Stewart has studied chemistry and worked in laboratories and factories. Thus when he took up medieval re-enactment, alchemy was an obvious topic to research.

Waiting only until he had his own back garden in which to practise, he has spent the last 7 years carrying out experiments based on real medieval alchemical texts, and studying the history of alchemy and chemistry, amazed at the recipes and the marvellous results. He also reads a lot of fiction and non-fiction.

Reviews of Alchemy in Medieval and Tudor England by Guthrie Stewart

You have subscribed to alerts for Guthrie Stewart.

You have been added to Guthrie Stewart's favorite list.

You can also sign-up to receive email notifications whenever Guthrie Stewart releases a new book.