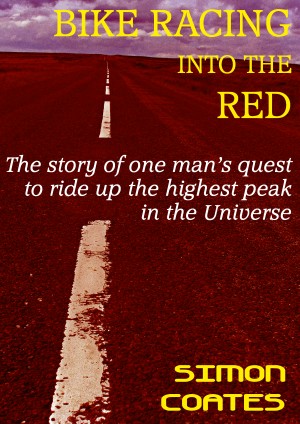 Bike Racing into the Red

By Simon Coates
The story of Jonas Zemke, an amateur bike racer from England as he takes on the challenge of the 240 mile hill climb up Olympus Mons on Mars. More
A 24th century cycling hill climb with a difference! In Britain, the road racing season ends with hill climbs raced all over the country, as riders end their competition for the year by hauling themselves up steep hills. For Jonas Zemke, these small hills are not big enough. Noticing a race up the biggest hill of them all, the highest volcano in the known universe, Olympus Mons on terraformed Mars, he embarks upon a quest to conquer this most extreme of challenges. However, life works in strange ways and through various twists of fate is plunged into other challenges that go way beyond the difficulty of any bicycle race. With exclusive foreword from double Commonwealth Games champion Paul Curran.
Available ebook formats: epub mobi pdf rtf lrf pdb txt html
First 20% Sample: epub mobi (Kindle) lrf more Online Reader
pdb
Price: $2.99 USD
Buy Add to Library Give as a Gift
How gifting works
Create Widget
Tags: cycling sport climbing sports fantasy marathon race sport inspiration sport action sport fiction sport bike sport romance cycling adventure
About Simon Coates

Reviews of Bike Racing into the Red by Simon Coates

You have subscribed to alerts for Simon Coates.