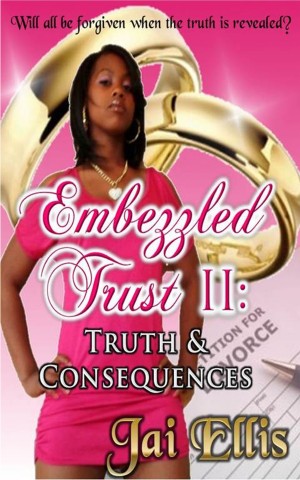 Born in Chicago, Illinois in 1988, Jai Ellis didn't make her debut into the literary world until 2012. Growing up in the typical inner-city neighborhood full of drug dealers and drop outs, Jai aspired to be more than her environment. She always loved being read to from an early age, which eventually led to her love of writing. During her middle school years, Jai discovered her talent for writing through her love of reading. Pulling her inspiration from the likes of Sister Souljah, Shannon Holmes, K'wan and others, Jai began to realize that she had a knack for storytelling herself. Thus sending her into an imaginative and sensational world of characters where her sometimes controlling nature wasn't a problem because the characters' lives were hers to piece together however she saw fit.
She was however cautious of who she presented her work to, and for a long time only shared her writings with close friends and family, who encouraged her to continue down her literary path. When tragedy struck, with the loss of a close friend, Jai was left emotionally crippled, and for a few years after his death she lost her passion to write. After sorting through the pieces and pulling herself back together, Jai found her drive again and with a new attitude, and an insignia to honor her lost friend, she came back stronger than ever. Finally letting go of the past, she pushed forward and introduced the world to "Money Over Errythang" and "Abused Authority", releasing both titles in July 2012.
Now, relocated to a small town in Iowa, Jai is hard at work penning many novels. She has already produced works such as "Money Over Errythang 2", "Heaven Can't Wait", and the "Embezzled Trust" series. But, Ms. Ellis isn't quite done just yet, and has countless other scorching, gripping, unforgettable, and addictive tales to weave that will leave you wanting another dose. When Jai isn't writing she can be found enjoying her other love, music, as well as researching topics on orca whales in captivity.
Although she now has 8 titles under her belt, Jai still considers herself to be a newcomer and is still learning and growing as an author. While she enjoys writing urban fiction she is also looking forward to trying her hand at other genres in the near future.
If you would like to know more about Jai's current and upcoming releases or are interested in interacting with her, feel free to visit her website MissJaiEllis.com and to connect with her on one of your favorite social media sites.
Add Jai On Facebook: Author Jai Ellis
Follow Jai On Twitter: @LadyJaiEllis
Follow Jai On Instagram:@AuthorJaiEllis

You have subscribed to alerts for Jai Ellis.

You have been added to Jai Ellis's favorite list.

You can also sign-up to receive email notifications whenever Jai Ellis releases a new book.