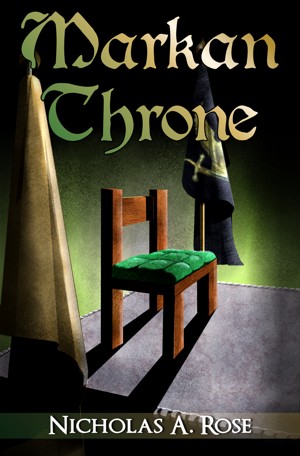 By Nicholas A. Rose
Rated 4.33/5 based on 3 reviews
An empty throne. The man who won the right to it in battle. The man who demanded it through hate. The sylph who never wanted it. More
Book One of the Markan Empire Trilogy.

Two rival claimants to the empty Markan throne meet in battle. When Marcus Vintner defeats his cousin Branad Vintner, it seems the matter is settled. But when General Kelanus is accused of murder, Marcus is implicated and all claims to the throne are suspended.

Zenepha, an intelligent and literate sylph, is plunged into the depths of Markan politics when he is thrust unwillingly onto the throne.

A third claimant, Hingast, is traveling to Marka, determined to press his claim and prepared to use force to get his way.

I've read some very good amateur/independent/self-published fiction in my time, but it isn't necessarily common, and I'll admit I wasn't expecting much from this book when I began reading it. In that regard, I was pleasantly disappointed. A strong world was built right from the start, one that showed a clear understanding of how medieval society and politics worked. At the same time, the fantasy element was ever-present and skillfully woven into the historical basis of this world, in a way that made it seem very natural in a way I have rarely seen in fantasy. The result was a rich, unique, and engaging world that did not merely draw from existing mythology but created its own and made it real.

It was a slower book than most I've read, with few moments of actual action and much of the novel devoted to politics and scheming, but far from it to say it wasn't good or interesting. It's not what I would call a casual read, as it took my full attention to keep track of all the characters and the various elements of the story, but that made it all the more engrossing. I did find some climactic events lost a bit of their impact due to much information being revealed beforehand; while said information was revealed sensibly, it did undermine the surprise of what could have been a much more dramatic event.

Still, I found this a very enjoyable and recommended read, and I am certainly interested in seeing where the story goes in the second book of the trilogy. The precedent set in this book seems to be building towards quite an epic conclusion.

Have just finished reading Markan Throne. I've read the last 4 chapters today... couldn't put it dowm - thank goodness my day has been quiet enough for me to keep reading!
Lots of characters in the book but they all have a part to play. No doubt many of them will appear in the other books in this trilogy.
Markan Throne comes to a satisfying conclusion but there are lots of questions still to be answered in the next book, Markan Empire, and beyond.
Now to read all of the supporting material put out by the author whilst I wait for the novella Gifted Apprentice and the next full novel Markan Empire to appear. Both due soon I've heard.
I want a sylph!

This is the first in what might be a long epic fantasy. It takes a long time for the plot to get moving while the reader absorbs the characters and worldbuilding. Excitement eventually begins to build. This book ends adequately at a point resolving some plot points but leaving others to the next book(s).

You have subscribed to alerts for Nicholas A. Rose.

You have been added to Nicholas A. Rose's favorite list.

You can also sign-up to receive email notifications whenever Nicholas A. Rose releases a new book.