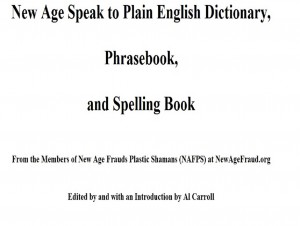 Most of his work deals with war and peace, human rights issues, One can see evidence of the influence of James Loewen, Linda Tuwahi Smith, Vine Deloria, Jack Forbes, Howard Zinn, and Noam Chomsky. He is a longtime human rights activist and volunteer researcher for NewAgeFraud.org, which defends Native traditions from spiritual abusers, exploiters, and imposters. More information is at http://alcarroll.com.

"So if you do end up downloading it, be sure to wash your hands." - Mike Laughery nailed it!

I downloaded this book expecting one of two possible outcomes - serious commentary on the clash between the New Age movement and conventional belief systems, or biting satire of the social trends that grew out of the New Age movement. Either one would have been acceptable, but ultimately it fails on both counts. The main body of the text is, not to put too fine a point on it, a list of insults and name-calling and derision that is simply formatted to resemble first a dictionary and then a phrasebook. The humor itself is very low brow and unsophisticated, which combined with the tone of ridicule and elitism makes the whole book a chore to get through. And that's not even the biggest problem with it; the biggest problem is that the book is not coherent.

One of the statements in the book, often repeated, is that the editor and contributors take great offense with the cultural appropriation of native tribal practices and their use in miscellaneous money-making schemes. While the New Age movement has no shortage of hucksters, grifters, cults and predatory individuals of other bents, the same is true of every cultural phenomenon throughout history. It's easy to criticize the New Age movement simply because it is the most recent example in living memory for most people, but the same thing happened with the Televangelists, the Spiritualist movement, the Christian Revivalists in their tents, the Catholic Church, and more than one scientific discovery including (perhaps especially) radioactivity. True fraud, true deception, has a very wide portfolio. Yet this book only concentrates on the narrow cross section between Native American cultures and the New Age movement, with a scattering of other subjects included in the periphery. So right away the title proclaims the book subject matter to be much more broad than it actually is.

Within the introduction itself, there is another internal conflict in the subject matter. The New Age movement - referred to as Nuage in the text ostensibly as a means to reach people through shock value but in practice simply serves as a linguistic stumbling block - is accused first of being dangerous for all the classic reasons. These include physical, emotional, and even sexual abuse; economic exploitation; social isolation and control; and finally the opportunity cost argument that such movements waste people's time by getting them emotionally invested in something which produces no visible dividends. With the exception of that last accusation, which is a complaint that could be levied against any and every belief system regardless of its origin, these claims do have a certain amount of documented support. This doesn't make them unique - like I said before, fraud doesn't play favorites or consider any area off-limits - but the dangers and the damage done through carelessness and outright malice are real, serious problems. The author / editor immediately undermined this important point by deriding New Age practices and practitioners as silly. There is NOTHING silly about deprivation, mutilation, rape, murder, or being so isolated that one essentially becomes a prisoner in their own mind. "Humor as a defense" was mentioned early and often in the introduction, but humor can only blunt the emotional trauma of horror. It cannot erase or override it.

By making this connection Mr. Carroll has revealed a contempt for other human beings in serious trouble that may or may not be shared by other members of the group that contributed much of the main body of text, New Age Frauds Plastic Shamans or NAFPS. This contempt is diametrically opposed to any claim of wanting to assist such people made elsewhere in the text, and indeed such claims may be made in jest or otherwise be facetious; sarcasm doesn't come across clearly in a text based format. This vacillation between a dangerous, destructive image of the New Age movement and a ridiculous, comical one is also quite damning, and resembles something Umberto Eco identified as a "continual shifting of rhetorical focus" whereby an enemy's portrayal alternates between being too strong and too weak. A Rhetorical Shift such as this indicates an extreme emotional involvement that precludes any objective evaluation of the subject matter. Not only does this cast a shadow of doubt over the entire thesis of the book itself, it combines with the choices of words in the text to make the contributors look and sound just as crazy and self-righteous as the people they profess to mock.

This book was meant as a critique of the New Age practices specifically that grew out of adoption and modification of native tribal practices. Even if the title accurately reflected that goal, the main text failed to live up to that promise. If the ultimate intention truly was to steer people away from hucksters and con artists or help them recover after the fact, the information in the "Additional Sources" section at the very end should have been the main body of the text and dramatically expanded on, instead of being tacked on at the end like a footnote, and the overall tone should have been much more serious. On the other hand, if the book was meant as a humor book first and foremost, the authors REALLY need to step up their game. In its current incarnation the book makes a lazy, half-hearted attempt to do both at once, and doesn't do either one that well; the only people who would find the book useful or entertaining are the same people who worked together to write it, making it an exercise in literary masturbation.

So if you do end up downloading it, be sure to wash your hands.

I found this book just high-larious! I also object to the sock puppet using my name to trash a book I like so much! My name is Theeland Robideau and Paul Robin Denton is guilty of identity theft by goshen! And then Mr. Denton shows up to bash Catholics too in his hateful screeds. Low, Denton, low. Look him up, he's a racist and a convicted rapist and cult leader.

Other than Al Carroll creating sock-puppet reviews for himself (American Man, Redwing44) no one has even looked at this waste of paper. His NAFPS newagefraud.org site has been down for a month. Removed by the hosting company for hare speech and libel.

Hilarious and dead on target. Funny funny FUNNY in how it takes New Agers to task for their pompousness, their mock profoundness, and their cultural appropriation and casual but also deep seated racism, bigotry, cultural imperialism, greed, and sometimes sexual abuse.

And the two (actually one) New Age racist trolls who squeal about being skewered show just how accurate this book is. Theeland is actually Paul Robin Denton, a convicted serial rapist and New Age cult leader angry over being exposed by NAFPS. He deliberately misquotes a quote FROM A TYPICAL NEW AGE MEMBER and lies and claims it's from NAFPS.

Excellent and necessary. Cultural misappropriation (aka cultural appropriation) from Native Americans is a serious problem. The newage market is full of non-Natives spouting bafflegab. Usually they rely on Noble Savage stereotypes, which, despite the newagers' claims to "admire" Natives actually disenfranchise and denigrate the very people being "admired."

This handy and entertaining book cuts through the bafflegab. It will save you time, money, and brain cells. Don't feed the frauds. Arm yourself with the translation!

I imagine this hateful screed only stays up here because no one ever looked at it. Here are a few examples: "YOU ARE JUST FULL OF HATE YOU RED NAZI SAVAGE" (caps not mine) "Indigenous European - A racist, either of the hard-core Neo-Nazi type (especially in Europe) or the 'kinder gentler racist in the United States or Canada",
"secret - some shit I made up". Literally quoting here. This is absolute rubbish.

The description is somewhat accurate, describing this as 'mocking'. The line between 'mocking' and 'harassment' is one that is crossed frequently by the group who compiled this 'dictionary'. The only instances where this third-rate academic has risen out of obscurity is in his attacks on members of various Native American communities. Carroll is much like Ward Churchill. An obscure third-rate academic, and a self-described 'Indian', whose supposed identity is not acknowledged by any tribal group. No one heard of Churchill until his hate speech drew attention to him and cost him his job, and Carroll is walking the same road. Al Carroll's only attention has come from attacking the reputation of others, and it will no doubt continue with further questionable works such as this.

You have subscribed to alerts for Al Carroll.

You have been added to Al Carroll's favorite list.

You can also sign-up to receive email notifications whenever Al Carroll releases a new book.