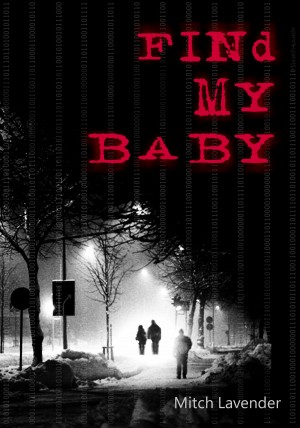 Find My Baby follows Zachary and Lucy Foxborn’s struggle through the awkwardness and disappointment of fertility treatments and adoption becomes a more and more appealing option. Once they start down the international adoption path and are in Ukraine, things start to go enigmatically wrong for them. Zachary is an antivirus specialist and leader in his field, making him a prime target for cyber-terrorists, and one such a hacker has set his sights on Zachary, intent on manipulating him into nefarious circumstances.

And then there is this ancient manuscript that no one has been able to interpret- what secrets does it hold?
Available ebook formats: epub mobi html
First 20% Sample: epub mobi (Kindle) Online Reader
Price: $3.99 USD
Buy Add to Library Give as a Gift
How gifting works
Create Widget
Tags: child ukraine international computer hacker adoption virus hackers identitiy theft
About Mitch Lavender

Mitch likes cake. He does not like zombies or clowns, even if they have cake.

He lives with his family in a suburb of Dallas, Texas and works in the IT industry. His first anthology, Death Zone and Other Stories gained critical acclaim. His writing has been selected and published as Best of Writing4All multiple years and has been published by Static Movement, Pillhill Press, Pantoum Press, Challenge, Thought Catalog, Red Fez, Outburst Magazine and other publications.

He has worked for Microsoft Corporation for over 18 years, has been married 25 years, and is the father of a son, adopted from Ukraine in 2001. With this background, it makes sense that his first, published full-length novel, Find My Baby, would be a high-stakes thriller interlaced with computer espionage, set with an American couple, attempting to do an international adoption.

Reviews of Find My Baby by Mitch Lavender

You have subscribed to Smashwords Alerts new release notifications for Mitch Lavender.

You have been added to Mitch Lavender's favorite list.

You can also sign-up to receive email notifications whenever Mitch Lavender releases a new book.