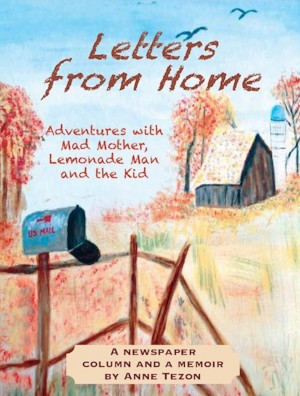 Letters from Home: Adventures with Mad Mother, Lemonade Man and the Kid

By Anne Tezon
Want to laugh out loud? Want to be entertained by the hilarious and sometimes pathetic experiences most of us face in growing up and growing old gracefully? Take a look at "Letters from Home: Adventures with Mad Mother, Lemonade Man and the Kid." This unique memoir is a collection of the personal newspaper columns of a small town Midwestern publisher over the course of her 30 year career. More
"Letters from Home: Adventures with Mad Mother, Lemonade Man and the Kid" mixes humor and pathos, slapstick comedy and life's Kodak moments in a unique memoir. This collection of the personal columns of a Midwestern small town newspaper publisher takes the reader on a journey full of episodes we can all identify with. It begins with the challenges the author confronts in becoming a parent at age 34 while continuing a demanding career. The book then progresses through eventual single parenting, remarriage and the aches and pains of aging. This book is full of laugh-out-loud episodes in home maintenance, pet rearing, gardening and attempts to become athletic by learning to roller blade, snow ski and go sailing. Finally, the collection of columns urges readers to tell their family stories before it is too late. The author recounts her struggles in coming to grips with the death of her mother. It also includes philosophical essays on moments of grace in witnessing what she calls "God's brushstrokes" and on the crucial role of community journalists in fostering a healthy democracy.
This memoir provides an example of how to grow up and grow old semi-gracefully by mixing humor and lots of love with gratitude for the journey's priceless opportunities.
Available ebook formats: epub mobi pdf rtf lrf pdb txt html
First 20% Sample: epub mobi (Kindle) lrf more Online Reader
pdb
Price: $2.99 USD
Buy Add to Library Give as a Gift
How gifting works
Create Widget
Tags: humor book memoir family humor women humor baby boomers humor writing humor and lifes lessons humor about aging memoir humor humor memoir
About Anne Tezon

Anne Tezon got bit by the writing bug in fifth grade when a "What I did last summer" assignment got rave reviews from her classmates. After earning a Bachelor of Journalism degree from the University of Missouri, and following a 3-1/2 year stint with the Peace Corps in Brazil, she began working for a small town weekly newspaper. She later purchased the newspaper and served as publisher, editor, photographer and even the janitor for more than 25 years, retiring in 2013. She was also a part-time journalism instructor and picked up a master's degree from the University of Memphis during her newspaper career.
While serving as publisher of The Caldwell County News, Anne and her husband, Marshall, were able to publish several books, beginning with her mother's memoir, published after her death in 2003. Anne has taken on her mother's cause of encouraging others to tell the stories of their personal journeys for the benefit of their descendants.
Anne lives in Kansas City with her husband, two dogs and a cat. She can be reached at WritingTalent49@gmail.com 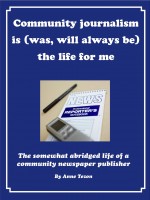 Reviews of Letters from Home: Adventures with Mad Mother, Lemonade Man and the Kid by Anne Tezon

You have subscribed to Smashwords Alerts new release notifications for Anne Tezon.

You have been added to Anne Tezon's favorite list.

You can also sign-up to receive email notifications whenever Anne Tezon releases a new book.