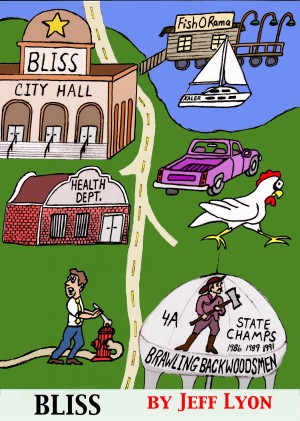 By Jeff Lyon
Bliss is a funny and irreverent account of the inner workings of small town government during rampant development. Join Health Inspector Ross Ryan as he probes the kitchens of greasy spoons and traipses through unsavory neighborhoods. The laughs and gaffes continue when Ross is promoted to Assistant Fire Marshal. Spend some time with the eccentric characters in Bliss. You'll enjoy your visit.

First 40% Sample: epub mobi (Kindle) lrf more Online Reader
pdb
Price: $2.99
Free! USD
Buy with coupon Use the code AG100 at checkout to get this book for free during our site-wide promotion!
(Offer good through May 31, 2020 )
Have a better coupon?
Add to cart, then apply your coupon
Add to Library Give as a Gift
How gifting works
Create Widget
Tags: small town anecdotes humor fiction city hall north texas health inspector lewisville
About Jeff Lyon

Jeff Lyon is the son of a truck driver and preacher’s daughter. He grew up in Irving, Texas, earned a Communications BA from the University of North Texas and then went ski bumming in Colorado. Jeff returned to Texas to work for the City of Lewisville before heading to Florida to become a licensed yacht captain. Jeff's next move was Chicago where he spent twelve years teaching sailing and captaining charters on Lake Michigan. During Chicago’s harsh winters he wrote travelogues, books, short stories and screenplays. Jeff returned to Florida to write and captain boats. The latest move landed Jeff with his wife Karen in Charlotte, NC. Jeff's adventurous tales are based on personal escapades and filled with extraordinary characters.

You have subscribed to alerts for Jeff Lyon.

You have been added to Jeff Lyon's favorite list.

You can also sign-up to receive email notifications whenever Jeff Lyon releases a new book.