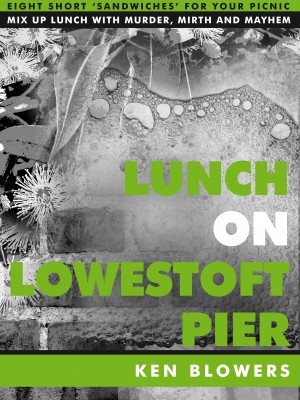 By Ken Blowers
In this fifth release in a series, Ken takes the reader on a journey winds amongst stories ranging in settings from the eastern shores of England to the Gold Coast. These locations serve as the perfect backdrop for Ken's character's to come to life. More
'Lunch on Lowestoft Pier' is another of Ken's delightful collection of short stories. This time they are predominantly based in his home country England plus a few more from the Gold Coast just for variety. These stories, as always, are short and punchy, just the right length to read in your lunch break.

In his fifth volume of short stories, Ken has something to offer everyone. New characters include nurses at work, secret service agents, school boys getting up to mischief and so on. Ken's ability to draw the reader into every day lives of regular people is most unique.

You too can be immediately transported to a time and era that possibly no longer exists, so you can either reminisce, or choose your own adventure - in any event, your reading needs are more than catered for, with this smorgasbord of saga's. Whatever your choice, you will not be disappointed as the unexpected unfolds with every word, slowly revealing the conclusion like a mini Agatha Christie mystery.
Download: epub mobi (Kindle) pdf more Online Reader
rtf lrf pdb txt
Price: Free! USD
Add to Library
Create Widget
Tags: school lunch secret detective spy boat
About Ken Blowers

"I like to get well into my stories from Page 1. They are low in background trivia and high in rich dialogue and action. I have no interest in how my characters are dressed, or how they walk or talk – unless it’s directly related to the way they act. This makes my short stories short and punchy. They are all the better for that.” Ken Blowers.

Ken Blowers is a 'Queensland Senior' writer of short stories and one-act plays. He was born in 1934, the youngest of seven children in the small fishing port of Lowestoft, Suffolk, England. His father died in 1939 when he was only 5. As a 6 year old he suffered the trauma of enforced evacuation from a coastal area threatened by enemy invasion. The returning home a year later to face the rigors of heavy enemy bombing. On leaving school at the age of 15 in 1949, Ken became an apprentice coachbuilder - at that time a woodworking trade! He was made redundant on immediately on completion of his apprenticeship at the age of 21. Thereafter he engaged in a variety of employment spheres to support his young wife and two children: fitter, car salesman, electrical salesman, postman, insurance agent, factory manager, shopkeeper, and barman. Disillusioned with his employment prospects and looking for a new start, he applied, through Australia House in London, for enlistment in the Royal Australian Air Force. He signed up on a Wednesday afternoon, flew out on the Thursday, and arrived in Australia on the Saturday (27 November 1965) which, he has been known to say, demonstrates how desperately Australia needed him!

Having enlisted as a clerk he quickly taught himself to type so he could move to a higher pay level!. Having no formal education qualifications at all, he enrolled in the Victorian Correspondence School (for kids in the bush!) and after attaining matriculation standard, he eventually become a commissioned officer.

In 1985, at the age of 51 and after 20 years Air Force service, he retired (with the rank of Squadron Leader). Ken and his wife Jean lived on a 28 acre property, where he bought and built a steel-framed home, over looking the valley. In 1992 the author and his wife moved from NSW to Queensland to be closer to their two daughters and their three grandchildren.

Interestingly, it was their happy experiences together in their local U3A play-reading classes that encouraged him to take up the pen! He has since become a prolific writer of 1,000 daily quotations, 48 short stories, and 40 one-act plays.

He now lives in Mitchelton, a north-west suburb of Brisbane, Queensland, Australia.

And he recently retired from writing a total of 30,000 postings in Ken’s Corner, in his UK, Suffolk, home town website lowestoftonline.

You have subscribed to alerts for Ken Blowers.

You have been added to Ken Blowers's favorite list.

You can also sign-up to receive email notifications whenever Ken Blowers releases a new book.