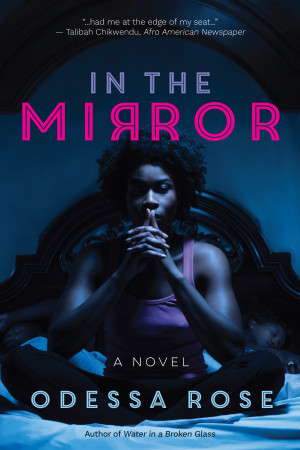 In The Mirror takes you on the nail-biting escapade of physical therapist, Jasmine Falls, who breaks into the home her boyfriend shares with his wife and their two young children in an effort to prove that community organizer, Daniel Roberts, sees her as more than just a passing fling. The question is, does Jasmine see what is meant to be or what never should have been? More
What does a woman do when she needs to prove that her boyfriend is not in love with his wife? This is the dilemma facing physical therapist Jasmine Falls, the protagonist of Odessa Rose’s latest novel, In the Mirror.

After going against her common sense and good home training, Jasmine becomes romantically involved with Daniel Roberts, a community organizer with a wife and two young children. Jasmine is blissfully content with her secret love affair until it begins to cause friction between herself and her best friend, Candy, who sees Jasmine’s love for Daniel as selfish, despicable, and just downright dumb. And then there are Jasmine’s parents, who are well on their way to admitting to themselves that the daughter they reared to be open-minded but not stupid has fooled around and gotten herself mixed up with somebody else’s husband.

Desperate to keep Candy from yip-yapping about her being a home wrecker and to prevent her parents from lying awake at night wondering where they went wrong, Jasmine does the unthinkable. She breaks into Daniel’s house. But unlike some more infamous home invaders, Jasmine’s goal is not to knock off Daniel’s wife or make goulash out of the family pet. Her only objective is to do what every woman in her position wishes she had the guts and opportunity to do—become a fly on the wall of her lover’s life so she can bear witness to the fact that Daniel is in love with her, not the woman he’s been married to for the past thirteen years. The question is, does Jasmine see what is meant to be or what never should have been?

Odessa Rose was born and reared in Baltimore City, which serves as the backdrop for her fiction. At a very young age she became an avid reader and writer of fiction, having been inspired by her mother, who is a voracious reader of horror stories, especially those of Stephen King. After reading a story in Readers Digest, Rose told her mother that she wanted to be a writer. Her mother’s response was, “Well, write, baby.” So she began writing short stories and tried her hand at a novel or two. But she wasn’t sure if she had what it took to be a “real” writer.

Then, while attending Coppin State University, Rose got an intriguing idea for a book. Three years after earning her B.A. in English, her first novel, Water In A Broken Glass was published by La Callie Nous, a small press in New York. Set in Baltimore, Water tells the contemporary story of a young sculptor named Tonya Mimms, whose inability to accept her homosexuality places her in the center of a love triangle when she meets the man of her dreams at the same time she meets the woman destined to be her reality.

Congresswoman Barbara Robinson calls Water In A Broken Glass is “A fantastic book.” Talibah Chikwendu of the Baltimore Afro states, “Mrs. Rose has created real people.” Coppin professor, Ann Cobb, states, “Rose blends music, color and a range of characters and human emotions.” Coppin graduate and radio personality, Doni Glover, says, “the novel fearlessly speaks to an often invisible culture with the hope that the reader will walk away a little more human…” Whitney Scott of Booklist states, “Rose’s meditative insights into family closeness and loyalty and her exquisite sense of detail make this a promising debut and a strikingly unusual romance.” Water In A Broken Glass was #6 on the “On-Demand Best Sellers” list. Its sales captured the attention of BET Books. It has been recorded for the Maryland School for the Blind, is on Towson University’s Rainbow Lounge and Resource Library booklist, is included in The Greenwood Encyclopedia of Multiethnic American Literature, and was used in a graduate level literature course at Wake Forest University. Accredited Online Colleges ranks Water In A Broken Glass #17 on their list of 20 Essential Novels for African American Women. Several book clubs have selected Water In A Broken Glass for their monthly read, and it continues to attract new readers. Recently, Lodge Street Films, an independent film company, released the feature film Water In A Broken Glass.

Shortly after the release of Water, Rose earned her M.A. in literature from the University of Maryland at College Park and began working on another novel entitled Kizmic’s Journey. But in the middle of writing that story, another tale took hold of her. She stopped writing Kizmic’s Journey and began writing In the Mirror. A Reginald F. Lewis Museum Book of the Month, In The Mirror is a provocative, suspenseful, compassionate, and oftentimes humorous tale that takes you on an unforgettable journey into the heart and mind of the other woman as she invades her lover’s home and becomes that proverbial fly on the wall of his life to bear witness to the fact that he is in love with her, not the woman he’s been married to for the past thirteen years. The Afro American Newspaper calls In The Mirror “interesting and intense.” Author Anondra Williams states, “Characters are Roses’ bread and butter, and she does them well, making you feel as if they are our friends and sometimes your enemy. Wondering what makes them tick and what will tick them off. In the end reality bleeds true and life turns out . . . interesting. The closet will never be the same again after reading In the Mirror.”

Rose is fast at work on completing her third novel, Kizmic’s Journey. She is the owner of Cool Water Press and a member of the Black Writers Guild of Maryland. In addition to her writing, Rose, working alongside her husband, is also the co-creator, writer, and producer of This Is Baltimore, Too, a video project devoted to promoting the good in Baltimore neighborhoods. She lives in Baltimore with her husband and their two sons and daughter.

Reviews of In The Mirror by Odessa Rose

You have subscribed to alerts for Odessa Rose.

You have been added to Odessa Rose's favorite list.

You can also sign-up to receive email notifications whenever Odessa Rose releases a new book.