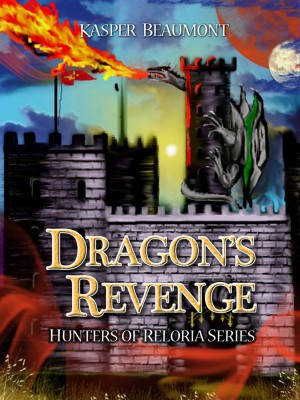 Dragon's Revenge (book 3 in the Hunters of Reloria series)

By Kasper Beaumont
Rated 5.00/5 based on 2 reviews
Magical Reloria is beset by hordes of invading enemy ships carrying giants with ocular laser beams. People and creatures from across the land band together against the invasion, while our group of heroes, the Hunters of Reloria, seek to restore the defensive shield to their borders. Epic battles with dragons and giants ensue, leading to a thrilling climax. More
Dragon's Revenge is the thrilling conclusion to the Hunters of Reloria trilogy.

Kasper J. Beaumont was born and raised in Australia and lives a quiet life with the family in a seaside town. Kasper has combined a love of fantasy and a penchant for travel in this trilogy. Kasper started to write on the urging of friends and family and enjoys watching readers become immersed in the magical world of Reloria. If you enjoyed Elven Jewel, please read Hunters' Quest and Dragon's Revenge. New prequels 'The Tragedy of Garass and Asher' and 'Sienna the Huntress' are now available with more coming soon. Check the website for details. www.huntersofreloria.weebly.com.

Also in Series: Hunters of Reloria

Also in Series: Hunters of Reloria

Finally, I have found an author who writes my type of happy ending!!! Dragon’s Revenge by Kasper Beaumont was the perfect ending to a wonderful trilogy. There were some sad points in the books. Let’s face it, we can’t have everything. Nevertheless, the book as a whole was extremely satisfying. The Hunters of Reloria is definitely going on the list of ‘My Favorite Series’.

Dragon's Revenge is the conclusion of Hunters of Reloria series. I have read and reviewed the first two books and waiting for this one to be released. I loved this series and had a lot of fun reading about amazing world of Reloria. In many ways it reminded be of the "middle earth" but it also possess an originality that made it all the more fun.

This third book starts from where the book 2 left off. On one side Reloria is under attack and on the other princess and her companions are struggling to get away from their enemies, trapped in a foreign planet with no way of getting to Reloria in sight. later they joined forces with rebels and were able to rescue wizards. Who then helped them to open a portal, so that they cab return to their homeland. Things are getting fierce by the day and mountain people were killed. When hunters are re-united, their mission was to fight and defeat their common enemy.

We meet some new characters along the way and all the old characters remain just as entertaining as before. My favourite character in this one is Asher-a shape shifter, who is mountain man and a dragon at the same time. But all the other characters are good too. and the climax was indeed epic. Loved it and recommend it to all book lovers/readers.

(reviewed 27 days after purchase)
kyra patterson reviewed on July 22, 2014
(no rating)
I was really eager to read the final book in the series and this did not disappoint... In fact I think the writing got better and better with each book. The characters are easy to love and the adventure fast paced and exciting and the ending is really satisfying with some delicious surprises in plot. I'm not usually surprised by a story line but this author managed it so I'll definitely be looking forward to more books from this author!

You have subscribed to alerts for Kasper Beaumont.

You have been added to Kasper Beaumont's favorite list.

You can also sign-up to receive email notifications whenever Kasper Beaumont releases a new book.