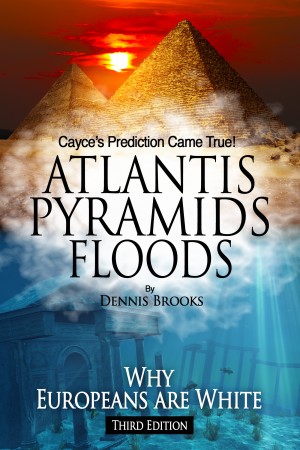 By Dennis Brooks
Plato’s story tells about a war between Atlantis and Europe. Based on his writings, the continent of Atlantis was North America, Mexico held the main and largest city, Tampa was the first city, and a small island in Tampa was the island of Atlantis. More
Plato’s Atlantis is a true story! Now you can learn where it was located, how it was destroyed, and when it happened. This book also shows the connection between the pyramids in Mexico and those in Egypt. It shows that Noah’s Great Flood is a periodic event where the Atlantic Ocean floods the Mediterranean Basin. This periodic flooding kills off most of the brown skinned population in the area leaving mostly blacks in Africa and whites in Europe. Before the next major flood comes along, it takes only a few hundred years for all of Europe to turn white again and all of Africa to turn black again. Then it takes thousands of years before the population of the Mediterranean Basin turns brown again. The last flood is also the one that destroyed Atlantis. This book also shows how Edgar Cayce’s predicted, that the island of Atlantis would rise again, has come true. The island rose during the time Cayce predicted it would happen, but no one knew it was happening. Now it holds a prestigious gated community.
Available ebook formats: epub mobi pdf lrf pdb txt html
First 20% Sample: epub mobi (Kindle) lrf more Online Reader
pdb
Price: $0.99 USD
Buy Add to Library Give as a Gift
How gifting works
Create Widget
Tags: atlantis flood pyramids noahs ark atlantis found atlantis the city lost city atlantis atlantis at war the great flood pyramids of giza noahs story atlantis the lost empire flooded cities atlantis in america atlantis in florida atlantis in georgia atlantis in mexico atlantis lost pyramids of mexico flooded city flooded world flood myth noah flood pyramids of egypt atlantis reincarnation past life regression egypt priestesses pyramid sphinx rituals flood story
About Dennis Brooks

As someone inspired by the mystery of Atlantis, I have been researching the topic since my youth. Now, evidence from a rare book and the 2011 earthquake and tsunami that devastated Japan provide evidence that supports the notion that the boundless continent Plato wrote about really was the Americas.
In short, Atlantis did not sink but is still standing as part of the landmass known as the Americas. To demonstrate this, this book will:
* Dissect the story of Atlantis as written by Plato and translated by Benjamin Jowett.
* Analyze Plato’s work while aligning Atlantis with the Americas and recognizing errors in his narrative.
* Locate the continent of Atlantis, the island of Atlantis, the city of Atlantis, and the plain of Atlantis according to Plato’s descriptions.
* Discuss the cause of the destruction of Atlantis and where the Atlantean people went after the destruction.
* Show how the Native American Hebrew people fit in with Atlantis, and where they lived.
Identify three main temples of Atlantis
Present excerpts from other writings about Atlantis before Plato’s time to demonstrate that Plato did not invent the story.
Moreover, as part of my research, I discovered the “Lost Tribes” theory—the claim of early writers and historians that all American Indian tribes have customs and traditions related to Jewish religion and beliefs. My belief is that as we solve the mystery of Atlantis, we also solve the mystery of the Hebrews in the Americas.
It’s a fascinating story.

Reviews of Atlantis Pyramids Floods: Why Europeans are White by Dennis Brooks

You have subscribed to alerts for Dennis Brooks.

You have been added to Dennis Brooks's favorite list.

You can also sign-up to receive email notifications whenever Dennis Brooks releases a new book.