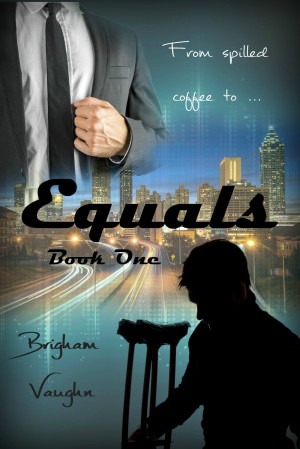 Stephen realized he still hovered in the doorway and he stepped forward and let it shut behind him. “Hi. How was your day?”

Russ leaned back against the counter, all of his weight on his uninjured foot. “Once I got over being pissed at you, not bad.”

Stephen gave him a wry smile. “I am sorry; I didn’t mean to come off heavy-handed.” He set the bags in his hands on the counter and walked closer to Russ. “I was worried about you.”

Russ laid a hand on Stephen’s chest, fingers curling around his tie. “I’m a big boy; I can take care of myself.”

Stephen nodded, stepping closer so his feet were between Russ’ but careful not to bump the injured ankle. “I am sure you can,” Stephen said calmly. “But I feel at least somewhat responsible for your accident.”

“I know you don’t.” For a few heartbeats, they looked at each other until Russ tugged at the tie. Stephen didn’t lean in, but it didn’t take a genius to decipher his intention. He looked up at Stephen and spoke quietly. “It feels strange to be wearing your clothes and sleeping in your bed when we haven’t so much as kissed.”

Stephen’s voice was husky. “Was that a hint?”

Brigham Vaughn is starting the adventure of a lifetime as a full-time writer. She devours books at an alarming rate and hasn’t let her short arms and long torso stop her from doing yoga. She makes a killer key lime pie, hates green peppers, and loves wine tasting tours. A collector of vintage Nancy Drew books and green glassware, she enjoys poking around in antique shops and refinishing thrift store furniture. An avid photographer, she dreams of traveling the world and she can’t wait to discover everything else life has to offer her.

This is the first book I have read by Brigham and I loved it.

Russell Bishop (Russ) had it rough growing up. His mother left after giving birth to his younger sister. His father not knowing what to do with a infant girl sent Addie to live with his sister. Working hard to pick up the slack when it was just the two of them, Russ worked for everything he got. So when Stephen comes into the picture, Russ doesn’t know what to do about Stephen’s kindness.

Stephen Parker never thought he would find love again, but after the incident with Russ, he is happy that they got to spend time together. Even if he is the one that injured Russ. Stephen is the take charge kind of guy, and he has met his match with Russ, who doesn’t take to kindly to being dictated to out side of the bedroom. Can these two men over come their issues or are they doomed from the start?

I loved Stephen and I also felt sad for him. He had some insecurities when it came to his relationship with Russ, but he worked on them so that they could be together. I liked Russ, but not as much as I liked Stephen and I’m not that big on reading books with older men. I felt sometimes Russ was acting ungrateful when Stephen did things for him. I know a man has his pride and everything, but dang. I wanted to tell him to get over himself and take the help as it was needed.

The story was well written and I can’t wait to read Partners, though I skipped ahead and read Family. The third book in the Equals series, but shush don’t tell anyone.

You have subscribed to alerts for Brigham Vaughn.

You have been added to Brigham Vaughn's favorite list.

You can also sign-up to receive email notifications whenever Brigham Vaughn releases a new book.