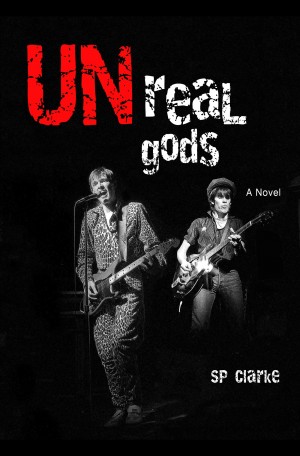 For Billy, everything is easy, stardom inevitable. But just as he and his band reach the brink of success the real struggle begins… More
Billy Granger doesn’t squander his life. Life squanders him before he gets a chance to pull it off. But he does give it one hell of a try. He is born to be a rock star. For him, everything is possible. He’s gorgeous, with remarkable talent and ambition, yet it’s his charisma that wins him the real attention. His flashy new band, the Unreal Gods, quickly rise to the top of Portland’s thriving music scene. When he and the band sign lucrative, multi-album contracts with a major record label, stardom for Billy seems inevitable. But just at the brink of national fame his real struggle begins, the epic struggle of Everyman...
Available ebook formats: epub mobi lrf pdb html
First 2% Sample: epub mobi (Kindle) lrf more Online Reader
pdb
Price: $9.99 USD
Buy Add to Library Give as a Gift
How gifting works
Create Widget
Tags: cancer music rock n roll oregon james joyce rock band portland ulysses everyman billy rancher unreal gods
About SP Clarke

Born in Los Angeles, California, SP Clarke has lived in and around Portland, Oregon since early childhood. Even then his attraction to music was profound. His love of rock music began with Elvis Presley, but the flames were fanned to a blaze when the Beatles and the British Invasion hit American shores in the 1960s. After teaching himself piano and guitar, he wrote his first song at age fourteen and played in his first rock band at sixteen. His involvement in the Portland music scene extends back to 1980, when he returned to the city after attending college.

Upon his return, Clarke began writing monthly music columns for several Portland-based publications, most notably for twenty years with Two Louies magazine (wherein he first penned the serialized History of Portland Rock, now available as an online resource), and for the past ten years with Buko magazine. In that time he has dedicated over two million words to the music and musicians of Portland, with more than a thousand reviews of local recordings, in addition to countless stories about the scene.

Clarke formed Walkie Talkie in 1981 and subsequently played with two popular hometown bands— Ed and the Boats in the late ‘80s and Jesus Presley from 1995 to the present. He has written or co-written several thousand songs and hundreds of instrumental pieces, including soundtracks for Lew Jones’ The Race and a Portland production of The Belle of Amherst.

In 1991, Clarke’s poetry was selected for an Alumni Award and was featured in the Silver Anniversary issue of Northwest Passage literary journal, where he has published many poems over the years. His poetry was also featured in the anthology 100 Poems, 4 Poets in 2003. Plans are in the works for publication of a comprehensive anthology of his poetry.

SP Clarke first met Billy and the Unreal Gods in the Summer of 1981 when, for their first show ever, Walkie Talkie served as the Gods’ opening act. Over the years, he came to know Billy well and developed a deep concern for the young man and his brother. In the last year of his life, Billy asked SP to tell his story someday. SP promised he would. Nearly thirty years later, SP Clarke kept that promise.

You have subscribed to alerts for SP Clarke.

You have been added to SP Clarke's favorite list.

You can also sign-up to receive email notifications whenever SP Clarke releases a new book.