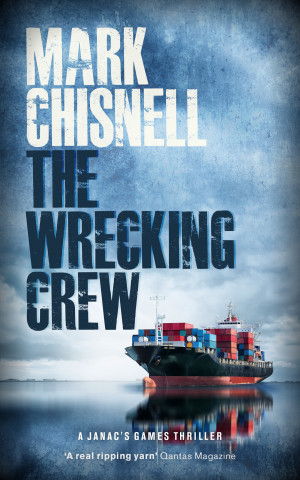 By Mark Chisnell
Rated 4.93/5 based on 14 reviews
‘A real ripping yarn... begging to be made into an all-action film.’ Qantas in-flight magazine.

Drug warlord Janac has turned to piracy to fund his battle for control of the Australian narcotics trade. Attacking the MV Shawould on an evil night in the South China Sea, it seems Janac has also found the perfect next victim for his psychotic games... sequel to The Defector. More
Janac's back, and there will be games - so what will you do when it's them... or the woman you love?

Drug baron Janac has unleashed a reign of terror in the South China Sea to fund his battle for control of the Australian narcotics trade. When he attacks an old cargo ship on an evil night off the Indonesian coast, it seems he has also found the perfect victims to exploit with his psychotic games.

Phil Hamnet and his wife Anna are sharing a last voyage before the arrival of their twins. Hamnet escapes Janac's attack, but Anna is taken and held hostage to ensure first his silence, and then his cooperation. But when Janac's rogue ex-Special Forces crew attack more ships and men start dying, Hamnet has to decide if he can continue to sacrifice the lives of unknown sailors to save the woman he loves.

It's an awful decision for anyone to have to make, but for a man who's already had the same dilemma - tormented in a lifeboat, adrift in the vastness of the Pacific Ocean - it's a living nightmare.

Reviews for The Wrecking Crew
'A real ripping yarn... begging to be made into an all-action film.'
Qantas in-flight magazine.

'It’s a great escapist yarn with Janac a really nasty villain who gives Hamnet untold grief. I enjoyed this one.'
Hawkes Bay Today.

'I found it impossible to put down.'
Boating New Zealand.

Reviews of The Wrecking Crew by Mark Chisnell

well written although if I had any criticisms it's that it seems a little too formal and a little too textbook if that makes sense but overall I liked this one. Four stars.

A well written thriller & worth every word.

as good as the first, i hated it loved it want to read more by him!

I really enjoyed this book and am looking forward to Moore by this author.

The Wrecking Crew is a sequel to The Defector, in which Janac made his debut. After reading The Defender, by Mark Chisnell, I was so impressed...I had to read his sequel, The Wrecking Crew.And again I was not disappointed. I could not put this book now.

Drug warlord Janac has turned to piracy to fund his battle for control of the Australian narcotics trade. When he attacks the MV Shawould on an evil night in the South China Sea, it seems he has also found the perfect next victim for his psychotic games.

Phil Hamnet and his wife Anna are taking a last voyage on his cargo ship before the impending birth of their twins. Phil escapes the pirate attack, but Anna is taken hostage to prevent him from revealing the pirate operation to the authorities.

Janac puts Phil to the ultimate test: will he sacrifice Anna and the children to save the lives of unknown sailors? And if not, then just how many ships and deaths will it take to make him reconsider.

It's an awful decision for anyone to have to make, but for a man who's already had to make it once before - in a lifeboat, adrift in the vastness of the Pacific - it's a living nightmare.

You will find yourself sitting on the edge of your chair, and be totally wrapped up in the adventure.A definate 5 Star rating.

This is an excellent read. The only disappointment is that it seems to be over way too soon. You want it to keep going on as it is so enjoyable. The ending is a real surprise. I hope that there will be another book by this author real soon.

Another superb read ..... I did the two books in 36 hours ! cannot wait for the next one, bring it on ASAP please.

Every bit as good as "The Defector" and a great sequel. Another can't-put-it-down novel by Mark Chisnell. How can you beat the combination of great writing, great story and FREE book?? If you don't take advantage of this great read, you're missing out.

The evil villain from 'The Defector' makes another appearance in this book - he is truly sinister and frightening and this book is as compelling as the one it is the sequel to. Read them both and you'll see what I mean.

I was so pleased to find that 'The Defector' by Mark Chisnell, had a SEQUEL! This book is fabulous! If you like excitement and can bear to be kept on the edge of your seat then this is the book to read!