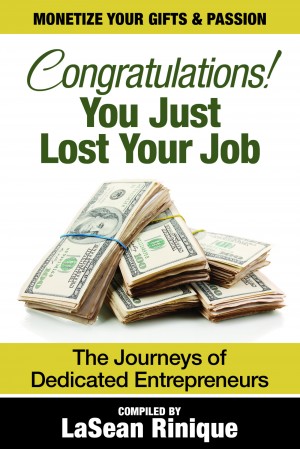 Congratulations! You Just Lost Your J.O.B

By LaSean Rinique
CONGRATULATIONS! YOU JUST LOST YOUR J.O.B!’ brings together a group of ‘dedicated entrepreneurs’ to prove that losing a job can dramatically change anyone’s life for the better. While most see a ‘Job’ as the road to prosperity and security, the book’s authors rightfully redefine the word as J.O.B: “Just Over Broke” or “Juggling Overdue Bills”. Want to find out why? Read on! More
In this economy, many of those who are struggling would do anything for work. Equally, those who are employed view losing their jobs as a life-destroying dread. However, a group of self-titled ‘dedicated entrepreneurs’ have banded together in a powerful new book to make it clear that losing one’s job can easily become their ticket and fast-track to a better life.

‘CONGRATULATIONS! YOU JUST LOST YOUR J.O.B!: The Journeys of Dedicated Entrepreneurs’, Compiled by LaSean Rinique, makes its case with plausible clarity; drawing on the experiences and successes of its authors, who each have an affirming story to tell.

Losing your job can be traumatic. But it can also be the New Beginning to the rest of your life story. The authors from ‘CONGRATULATIONS! YOU JUST LOST YOUR JOB’ share their journeys from Employees to Entrepreneurs. This masterpiece is from a collection of dedicated Entrepreneurs that finally left the 40/40/40 Club. If you were struggling THEN, well you know the rest! Read about the joys of not having a J.O.B situation- Just Over Broke or Juggling Overdue Bills.

Many people say that they want to become an Entrepreneur; however, after a few no’s or failures, they mistake the process of growth and development as failure. Perseverance, dedication, resiliency, trial and error are part of the recipe for success. These authors range from those that tried every home based business, failed miserably on a first attempt and some that became heart-broken when their J.O.B (sense of security) was pulled from under them. This book will make you rethink all those pre-conceived ideas and see how blessed you are to have lost your J.O.B. Imagine, you worked 40 hrs a week, for 40 years ONLY to receive 40% of your pay. If you struggled while earning it -what makes you think that retirement will be better?

Your boss at your J.O.B wants you to be well; however, you have to ask permission (or beg) to go to a dental appointment or doctors visit. Why should one have to choose between lost pay, burned up vacation days or their wellness? It just does not seem fair.

You cannot get your time back! How many recitals, plays, games, first steps, loose teeth and holidays did you miss with your family? Has time slipped away so fast that it seems like your child went from birth to college in one day? There is still time for change.

We decided that these things and more were more important! Read how losing a J.O.B (Just Over Broke) actually changed our lives for the better. What a gift!

“The reality is that, in today’s climate, even those who are employed have trouble seeing a positive future,” admits Rinique. “Guess what – they are right! Having a ‘J.O.B’ won’t get them to where they want to be in life; even though the public’s general perception of this is backwards. By sharing our stories, we hope to make it clear that paving one’s own path through life bears not only more financial fruit, but an abundance of emotional happiness.”

Continuing, “Fifteen individuals who were laid off contributed to this book. The end results is a showcase of how a pink slip also doubles up as a ticket to the life everyone desires.”

Aside from simply sharing their stories, each author also contributes valuable advice for those thinking of starting their own business. “There’s an abundance of tips for the novice entrepreneur in our book. We have made the mistakes for you, burned our money on schemes that didn’t work out and now compile it one place so you don’t make the same errors. If only we had access to this information when we were finding our business feet!” Rinique adds.

LaSean Rinique Shelton is an acclaimed International public speaker, radio personality, media strategist and soon to be published author of 2 books. LaSean has become a sought after speaker in the industry and she is prepared to break barriers and create stepping stones for the masses. She was born and raised in Jamaica Queens, NY, oldest of 3 children. She attended August Martin High School and juggled cheerleading, mixing and editing for the tech crew and various community service activities. Known as a motivator, LaSean encouraged her peers and those around her to do better and strive for better. In 1990 she graduated from August Martin, and broadened her education by attending Delaware State University. While at DSU, she was dedicated and active in many activities. Her most acclaimed memories include the choir, cheerleading and being lead actress in Dr. Damus Kenyattas Play Production troop which later became a traveling production troop.

After graduation, LaSean became a professional actress and was casted in several plays (off-off Broadway and local), Law and Order, NY Undercover, Improv Troops, commercials, local cable shows and several movies. Though acting was quite enjoyable, she felt something missing from her life. After being knocked down by life’s many blows, it was then that LaSean learned her true purpose in life-to motivate and encourage others to be their stellar best.

Her first opportunities to motivate started at Treatment Facilities, Institutions, Churches and small businesses. She felt alive and a sense of purpose showing people how to manifest their vision to reality. Twelve years later, she has increased her market and is now experienced with assisting teams, families, youth groups, agencies, Celebrities, Churches and individuals with stellar ways to brand or re-brand their products or service, while motivating them towards success. Her energy is positively contagious, once you book LaSean, you will truly refer and book her again!

LaSean launched Awake the Champion in you with the vision to improve as many lives that she can, one person at a time. As a social media strategist LaSean Rinique, has the market cornered and locked when it comes to exposure. She teaches agencies way to improve exposure and maximize their vision. As a Transformational Coach, LaSean reaches deep within her clients to grasp the voice and vision within. As the motivator’s motivator, LaSean assists with keeping Coaches, Professional Speakers, Supervisors, Business Owners and Leaders fresh and relevant. She also privately and discretely works with celebrated clients with imagery, refocus and re-edifying their careers. In addition to this, LaSean heads various outreach movements keeping the “Least of Thee” in mind.

LaSean has served as a contributing writer for several blogs, online magazines both National and International, hosted and co-hosted over 15 radio shows both terrestrial and internet, over 5 television talk shows and has a long acting resume inclusive of movies and TV network shows. In addition, LaSean has served on multiple speakers associations and symposiums that taught the benefits of monetizing your worth on the web, how the Media industry while simultaneously crushing traditional outlets. LaSean has shared platforms with greats such as Les Brown, Dr. Willie Jolley, and Cheryl Wood and has inspired over 100,000 lives with combined events. She is currently encouraging the masses with her upcoming book “Congratulations! You just lost your J.O.B”, this book is showing those that are unemployed or underemployed that they can monetize their gifts and experience the benefits of entrepreneurship. She has traveled through the States inspiring many and this message has resonated on the airwaves, YouTube and beyond. LaSean has earned many accolades; however, her most prized and celebrated of them all are her three children Anthony- Marc, JiHaad- Harmeen and Aliya-Bernice.

To book or contact LaSean call (302)729-2280 or email her at Info@awakethechampioninyou.org
www.AwakeTheChampioninYOU.org

You have subscribed to alerts for LaSean Rinique.

You have been added to LaSean Rinique's favorite list.

You can also sign-up to receive email notifications whenever LaSean Rinique releases a new book.