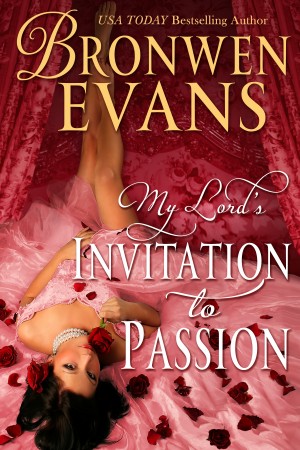 Invitation To Passion (My Lord's)

Madeline Knight thought she was doing the right thing when she saved Richard Craven from his lover’s irate husband. Now her silly schoolgirl crush has left her married to a man who’s in love with another woman. Consumed with guilt over trapping Richard, she tries her best to be the perfect wife and win his heart. Failure is not an option. For if she fails she loses everything, she loves him too much not to set him free…

While Richard and Madeline confront the reality of their marriage, Madeline’s life comes under threat. A family enemy is set on revenge. Will Richard learn the truth of his heart, and what is truly precious to him, before the unknown enemy destroys their world?
Available ebook formats: epub mobi lrf html
First 15% Sample: mobi (Kindle) lrf Online Reader
Price: $3.99 USD
Buy Add to Library Give as a Gift
How gifting works
Create Widget
Tags: romance romantic suspense victorian historical romance regency marriage of convenience
About Bronwen Evans

New Zealander BRONWEN EVANS loves story-telling – gobbling up movies, books and theatre. Her head is always filled with characters and stories, particularly lovers in angst. In 2007, encouraged by a close friend battling a life-threatening illness, Bronwen finally started down the path to publication by joining RWA, The Beau Monde. RWAustralia and RWNZ. Bronwen’s first manuscript, INVITATION TO RUIN, was completed late 2009 and was sold by her agent, Melissa Jeglinski of The Knight Agency, to Kensington Publishing early 2010, in a two book deal. Her debut novel, INVITATION TO RUIN, received a 4.5 star rating from RT Book Reviews and has been nominated in the RT Reviewer’s Choice awards – Best First Historical. Invitation to Ruin was also well received in Publishers Weekly - Evans's debut Regency is filled with sizzling romance... Strong characterizations, smooth plotting, and plenty of explicit sex will appeal to fans of modern Regencies. (Mar.)

You have subscribed to alerts for Bronwen Evans.

You have been added to Bronwen Evans's favorite list.

You can also sign-up to receive email notifications whenever Bronwen Evans releases a new book.