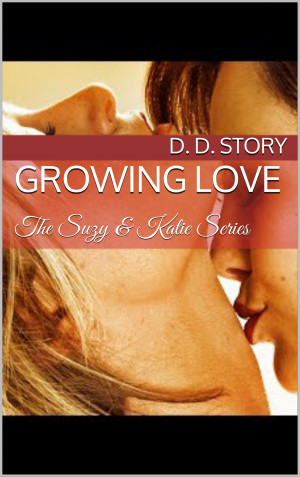 By D. D. Story
Growing Love picks up the story after the surprising ending of First Blush. Surprising in the fact that Suzy’s husband does not intend to stand in the way of the deepening and steadily growing love, that Suzy and Katie’s affair has become. A love that has transported Suzy out of the closet, she had used locally to conceal her bi-sexuality, to become open and free about her love for Katie. More
Growing Love is the second book in a five book series. The story, as well as the series, is centered around the title characters of the series Suzy and Katie.

Growing Love picks up the story after the surprising ending of First Blush. Surprising in the fact that Suzy’s husband does not intend to stand in the way of the deepening and steadily growing love, that Suzy and Katie’s affair has become. A love that has transported Suzy out of the closet, she had used locally to conceal her bi-sexuality, to become open and free about her love for Katie.

D. D. is now D. D. Story
In order to make my books available to a rather large segment of the digital world, I have had to include a proper last name, instead of just initials.

D. D. was the pen-name that I wrote under. D. D. is now D. D. Story. Only the name has changed, and maybe the odd cover or two, as I have had to re-do them all. The stories are the same, as is the reason I opted to use a pen-name initially. Due to the genre that I feel most comfortable writing about, and the simple fact that the majority of my works are erotic in nature, and adult in content. The world of self-publishing and e-book, had opened up the opportunity for me, like so many other authors, to publish the prose or pose that I have written, and continue to write.

At the present time, I have written and published twenty seven works, including: Novels, Novelettes, Short Stories, and Books of Original Poetry. I also publish two blogs, and moderate two communities on Google. With the change in Pen-Name discussed above, I will now be able to have my books available in all digital formats.

Like most authors, people seem to ask you to describe your writing styles: The first description that I used for my writing style was and still is; “When it Flows I Write.” I am not one to sit and stare at a blank screen, or sheet of paper, and wait for something to appear. If there is a story in me to be told, it will make itself known to me very quickly, many times even before I sit down to write.

In conjunction with “When it Flows I Write” a new description of my writing style as taken center stage recently; “I Write When and What My Character’s Tell Me.” The most recent of my works, the stories have been directed by the characters in the books. It seems as if they have taken control of the story, and are merely using me as in instrument to convey it. A writing direction that has made for some interesting comments, when talking to friends about a story in the works. When asked, “So what is going to happen to… next?” I often use the line, “I don’t know, they haven’t told me yet.” I am enjoying this new twist, as I get surprised, while writing the story, as often as the reader does when they read it.

About the Series: The Suzy & Katie Series

A story of love and romance between two women brought together by fate. The story and the characters exist in a world that many would call a fantasy. Unfortunately, today it is a fantasy world where everyone is equal, and people treat people with respect, and without bias. So clear your head of today's troubles, and join the girls on their life journey beginning with their first meeting, the growth of their love, a vacation filled with surprises, the loss of a friend that brings two families together, and an amazing and fantastical time on a tropical paradise.

You have subscribed to alerts for D. D. Story.

You have been added to D. D. Story's favorite list.

You can also sign-up to receive email notifications whenever D. D. Story releases a new book.